Page 100 – from Elephant in the Living Room

Sep 29, 2016 By Alison Leslie Gold in Elephant in the Living Room 1 Comment 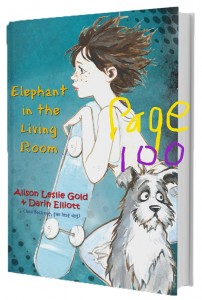 ... Danielle bends down and picks up her skateboard. She’d like to say something about her father, but decides against it. Instead she takes a Sharpie out of her pocket and draws an elephant on the bottom of her skateboard beside a decal.

“How can you tell if there’s an elephant in the refrigerator?” she asks her mother, instead.

“How?” her mother wonders.

“I’m collecting elephant jokes. Want to hear another one?”

“Why is an elephant large, gray and wrinkled?”

“Because if he were small, white and round he’d be an aspirin.”

“I’ve got to digest that one,” responds Minnie, tongue in cheek.

Minnie gives her a thumbs up.

“What do people mean when they say, ‘An elephant in the room?’ I don’t get it and it’s not even funny.”

“It’s not a joke, honey, it’s a saying.” Minnie replies, “It’s when there’s something that should be obvious, like, say, someone’s got a big pimple on the end of their nose, but no one mentions it. Or remember when your grannie had cancer and we never discussed it in front of her? See, it’s like there’s this huge elephant in the middle of the room and everyone’s pretending there’s nothing there and just squeeze past it. Get it?”

Minnie turns serious and asks, “Dani, girl to girl … can I ask you something?”

“Sure,” Danielle replies, even if she is a bit scared of what it might be about.

“Do you think Daddy likes it?”

“How would I know?” she answers, glad the question wasn’t about what she thought it was going to be about. But also a little disappointed that it wasn’t.

Minnie pats at her hair that’s rippling in the wind. Flopsie doesn’t like wind and has tucked her head down into her neck.

“Speaking of elephants, I hope it doesn’t make me look fat.”

Danielle looks down again at the surfers. One has caught a surging wave and rides across the golden reflection of sunset on the water.

“Hmm,” Danielle thinks to herself. “I wonder if surfing is just skateboarding on waves?”…

the story of a dog, a skateboard and a family secret

available in paperback and on kindle on Amazon