My friend Jill (aka Suzanne Jill Levine) who lives and teaches in Santa Barbara, California, passed through town last week. We met for coffee and/or food at the Rubin Museum restaurant. 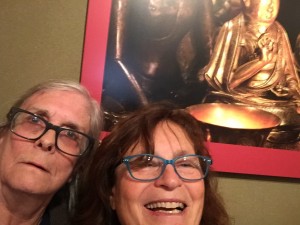 After catching up (though I could easily have had another cup of coffee or two), Jill was itchy to wander through the streets of her former hometown and I joined her. We strolled over to Housing Works on 17th Street (I bought a jacket for $10), then on to Muji on 5th Avenue (socks for $3.99).

As explained in her internet site: Suzanne Jill Levine is a leading translator of Latin American literature, and professor at the University of California in Santa Barbara where she directs a Translation Studies doctoral program.  Her scholarly and critical works include her award-winning literary biography Manuel Puig and the Spider Woman (FSG & Faber& Faber, 2000) and her groundbreaking book on the poetics of translation The Subversive Scribe: Translating Latin American Fiction (published in 1991 and reissued in 2009 by Dalkey Archive Press, along with her classic translations of novels by Manuel Puig).

Her many honors include National Endowment for the Arts and NEH fellowship and research grants, the first PEN USA West Prize for Literary Translation (1989), the PEN American Center Career Achievement award (1996), and a Guggenheim Foundation fellowship. In 2010 she published a five volume series as general editor of the works of  Borges for Penguin Classics, and since then won yet another PEN USA prize for her translation The Lizard’s Tale by Jose Donoso. Jill has recently translated fiction by Puerto Rican writers Luis Negron and Eduardo Lalo, among other creative work. 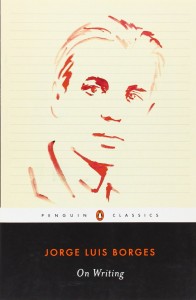 She is also very funny and dear. Yesterday she sent me a few musings on her New York visit.

I arrive at night at JFK—encouraging: the flight came in early, 8 pm instead of 8:30. Hop into the limo Carmel 666-6666, and off to Manhattan, almost immediately we hit standstill traffic; my driver, Girinda, from New Jersey, explains, “The United Nations…they come into town…and for the whole week the traffic is blocked everywhere!”   From my bubble in Santa Barbara, California, I land in the midst of New York brimming buzzing honking; an hour later we are inching on the Williamsburg Bridge: Girinda: “Impossible to take the tunnel… UN…gridlock…etc” but the city’s laser-bright colorful spires come into view as I scan from dear old Empire State Building to the still unfinished-looking Freedom Tower…. Now Girinda and I sitting on the bridge for what seems endless I watch a slim smiling girl dressed for her night in exercise tights move agile along a sidewalk …over two hours after landing I finally make it to the West Village, my friend Lee Percy (editor of the film “Snowden” I will see later in the week) patiently waiting, and I learn that it was the bomb explosion in Chelsea—around the time I landed—that had held up the works—29 people injured—we look out Lee’s 9th floor window and see the flashing blue red yellow white lights of the police and emergency vehicles up the avenue toward Chelsea.

Relieved to feel the sidewalk as we walk along these night streets I knew so well in my youth. We have our late dinner at Pizzeria Malaparte, delicious pasta and light subtle wine, a New York restaurant—so much closer to Europe—that Santa Barbara cannot beat.

Up to the Berkshires on Amtrak for a brief interlude:

The Hudson—river of my childhood in Washington Heights and Inwood—and now, heading north, lush forests, passing Beacon, their Sunday fare by the river, near the station, I take note of a person sitting on a bench under a tree to read. People make the most of nature here in New York. There is nature for solace. From the train window I catch the ruins of a house, almost castle-like on a little island in the river. How I love to be in the lush countryside of the east coast. At Lee’s house in Canaan, my nephew David drives down to visit that night, such a dear face I am glad to see.

Would I have become a translator if I hadn’t been a native New Yorker, if I hadn’t spent my young years in that city, “melting pot” of peoples from all nations, religions and ethnicities? Now that I’ve lived on the West Coast for over thirty years—decades that seem to have gone by at breakneck speed even though many a “why am I here” moment of anxious self-doubt lasted a century—I know at least one answer to the question my students ask: “how did you become a translator?”

I cannot imagine having translated, as I did in my early to mid-twenties, writers like Guillermo Cabrera Infante and Severo Sarduy, from Havana, or Manuel Puig, from Buenos Aires, had I grown up in suburbia or far from Saul Steinberg’s center of the universe [see below*], New York, city of salvation and rebirth for exiles. Maybe, like Susan Sontag born in the suburban spread of Orange County, I would have been alienated by my surroundings and would have bolted, first to Chicago then to New York, never to return to the ‘left coast’—as a wise guy I know calls California. But I also might have been seduced by beach bumming and outdoor hedonism—after all I loved tennis—and, mostly, how I would have had the opportunities available to me then, as a high school student at Music & Art, and on Saturdays, the Juilliard School of Music. Where, but in the city, could one be so intensely exposed to theaters, museums, pulsing street life, and the brilliant people I was to meet, a few years later, in those post-Cuban revolution 1960s. 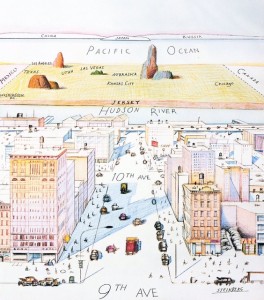 « Iceberg lettuce » Page 100 – from Elephant in the Living Room