God’s side of the story 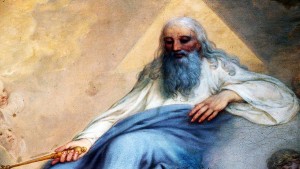 God’s Side of the Story

I tried to be both mother and father to him. To be a friend. I did my best.

On the nearly starless night of his birth I sent a flashy big-mouthed star shooting across the sky. It chewed up and swallowed all weak, dim stars and starlets in its path, cutting quite a blinding swath. No doubt about it, attention was paid.

He was born in a cave. I saw to it that all he needed to do was suck on his fingers and a different sustenance would pour forth from each. One provided water, another milk, a third butter and a fourth honey. I left one finger free so that he could do as he pleased with it.

He was an early talker, a grower, outgrew the cave quickly, so I moved him into a hut in the city. It wasn’t a bad place. It had its plusses. In the evening light, the sloping, limestone sides of the mountain seemed as if they were red. Pebbles, seashells and mud were mixed together to form the bricks that made his and other huts. They were sturdy huts and kept the elements out. In that place, the gold-domed shrine to the moon-god glimmered in the unrelenting, boiling sunlight. The desiccated remains of a sacrificial offering – usually a small animal – quickly became rancid on the long, brick tables where it was left and stunk up the town. It was disgusting. What slobs the fanatics were. Obviously their gods had never told them to clean up after themselves.

He showed surprising bouts of temper. One time he took an axe to every idol except one in the temple. When the priests caught him he tried lying, said the gods had done it, had quarreled, smashed things. But they weren’t buying and tied him up with fat ropes, then pushed him into the roaring furnace. Of course I hoped he’d learn his lesson, but – needless to say – I couldn’t let him burn. Although the ropes were incinerated, his tender flesh remained untouched.

I tried talking to him. It seemed like he listened but I’ll never really know if he heard or if he acted like he did to shut me up. The locals were so pissed off that I thought he should put his back to that town and start fresh somewhere else. I told him, Go forth. He asked me, Where? I’ll show you where, I promised. But he dug in his heals, resisted. I couldn’t blame him, he’d gotten used to this city. So I coerced him, raised my voice, promised to make him a great nation, to bless him, to make him famous. Was he listening? Who knows. I only know he finally agreed to get out of town, to start fresh and I did as I’d promised and showed him the way.

At the right time I gave him his wife. I thought they would make a good match since she was his half-sister and I hoped they’d intuitively view/tackle/thwart/embrace life from the same starting point. I think I was right because although their marriage was tempestuous to say the least, it did weather plagues, famines, jealousy, and yes – worst of all – infertility. They survived all and stayed together under one tent.

When they reached their seventy-five anniversary, I noticed they were in a terrible rut, and needed a change. I tried speaking quietly this time, to not yell, not command. I suggested a journey, explained that a better place was waiting. A place that would belong to only him. Again I promised that his descendents would become a mighty nation. And, either he heard me, or was fed up, because he quickly packed up and set off across the scorching arid desert.

They pitched their tents on the main highway.

Though his knees were aching, he gathered his wife against his stocky chest in the thin light of twilight. Using olive oil, he lubricated his part and hers. Only half erect, she kneaded the source of his seed. Talk to me, she entreated him. But either he didn’t hear, wasn’t in the mood or his thoughts were elsewhere, because the only sound he emitted was a mix of wheeze and a goat-like noise. Her crenolated breasts wobbled with every motion.

In half-sleep she imagined that she’d birthed forty babies at one time – one after another. After the birthing she counted four hundred fingers and four hundred toes, washed down forty faces with water. She wrapped each in bleached cloth but when the time for nursing came she could only nurse twenty. She gathered together the best and strongest-seeming twenty. Then, she threw the rest away.

In deep sleep, he dreamt that he found a shiny, purple beetle among his bedding. Responding to a well of sadness in his chest, he thought, I wouldn’t care if I had a child that was purple as a beetle, as long as it was mine. Still in a dream, he went out of the tent to find and press his ear against the breasts of his wife. He caught sight of her in a small grove of pistachio trees. As he approached he saw a look of agony on her face and hastened his step. He reached her in time to catch her as her legs crumbled and propped her against a tree. Her face had gone deathly white. She didn’t seem to know him so he slapped her cheeks to snap her back. When he looked he saw that her robe had parted, her knees were splayed into a birthing position and it seemed as if the opening between them was growing wide enough to see inside. He bent to look just as she gave birth to not one – as he’d wished – but to a swarming load of purple beetles. My children, he thought. A mighty nation?

On waking he moved the tent flap and saw in first light that flocks of goats and flocks of sheep were mingling with his own herds of animals. An olive grove on one side of the highway, a blooming laurel on the other. His wife had left the tent.

He heard rustlings of insects, birds, goats and sheep. To stretch his aching knees, he rose slowly and stepped out of the tent, holding on for balance. The edges of the sky were tinted in pink and rose. As he drank in the dawning of the new day, a disc of molten gold rose from under the horizon. I wished him to experience the majestic glory of morning, to have it lift his anguish, but he held the back of his hand over his eyes to shield them from brightness that burned rather than inspired since his aging retina had become sensitive to bright light.

All day and the next and the ones after that they wound slowly along the snaking path through the stony mountains. When, finally, the hills got less steep, less dense with sycamore trees, they passed large tilled areas planted with ripening barley, then fields of corn. They passed wheat, almond, olive and apricot groves, and – after one last ridge – caught sight of a body of water alive with sparkles of jumping light. His flocks ran headlong down the path and begin grazing at the water’s edge.

As he stood looking, I told him. This is the land that your descendents will inherit. The usual skeptical look crossed his face. He shrugged, his arms rising and falling like the injured wings of a bird. He signaled the others that their traveling was complete, they would go not further. Pitch my tent here, he ordered. 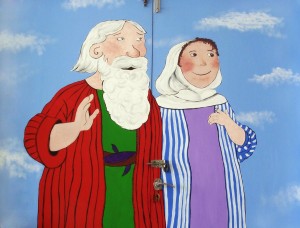