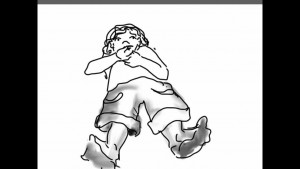 He/she is pulpy, moist, long and slender, an earthy shade of red, with no limbs. He/she is early to arrive for our interview, I’ve barely finished composing a few questions. I comment on this:

He/she burrows around to face me, replies:

W: I’m usually early. I can’t help it, though it can be dangerous.

W: I’m sure you know what they say about the early bird getting the worm?

ALG: I’m sorry if that’s so. I’ve never thought about it from a worm’s … your … uh, view of things. I’m so glad you’ve made the time for this interview. Already you’re opening up new prospectives…

Did F.D.R. really say that? I don’t dare ask but suddenly remember the buffet.

ALG: There are nibbles, if you’re so inclined.

I point out the display of attractively presented swabs of decaying leaves au jus, horse manure tartar, fungi in red soil, decomposing scrambled eggs coated with coffee grounds. All prepared with great care, garnished with acorns and ant hills. He/she heads right for the horse manure. I sit down to wait.

I glance at my notes.

ALG: Perhaps you can give me some insight into the experience of regeneration. Have you ever lost or had a segment cut in two?

ALG: Is it traumatic?

W: Not at all. It’s … how can I put it … invigorating. You might find this surprising, but it’s a great way to make friends with ones self.

W: Or selves….depending on how many segments, or slices have occurred … often there are more than two. One cure for loneliness, ha ha. My compliments to the chef.

ALG:  I’ll pass that on. Did you try the fungi?

W: I’m fungi intolerant. I love it but have to be wary. Fungi can go right through me. Where were we?

W:  Ah yes. Imagine how renewing it can be! How restorative! How reviving!

ALG: Do you mean that your overall well-being improves?

He/she begins to  creep away from the buffet, away from the microphone, a fresh mucusy sheen on his/her squishy furrowed surface.

W: Not exactly. I have no idea why, but, in my case, the tip of my tail has never regenerated. Not that I’m complaining. I’m been guilty of stepping on the same rake again and again, but I pride myself on never whinging. It’s difficult enough to be a worm – no limbs, no eyes – but to be a kvetch too …. heaven forbid!

Most of the buffet has been left untouched, he/she explains that he/she has therapy, and must be early as usual, to stay in character. I’m disappointed, but what can I do or say.

W: To be continued. Okay?

W: Will do. I swear. And leave the buffet as is. It’ll taste even better next time.

Should I, I wonder, noticing the covered metal can on the other side of Ovid’s pool. Foregoing a decision my eye is drawn to the solitary chirping bluebird splashing in the pool of clear water.

Bluebird: ‘The early bird might get the worm, but it’s the second mouse that gets the cheese.’* 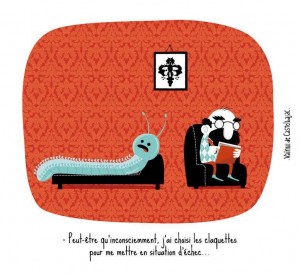