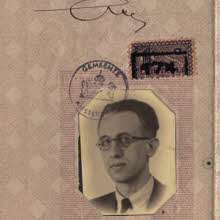 He was a real Dutchman, very tall, lean, with billowing white hair. We used to joke that Miep had never seen him without a jacket and tie. He smoked small cigars, was a man of few words, who had a sharp, dry sense of humor. He collected stamps. I last saw him in Amsterdam in late January, 1993 as I was leaving for the airport to fly back to Santa Monica (where I then lived) after a week’s stay in Holland. He was 87 years old, had been ill and had spent much of the week bed in the bedroom he and Miep had shared for more than fifty years.

The last cup of coffee drunk, gifts of Edam cheese and Verkade chocolates squeezed into my suitcase, I was ready to leave and I knocked on the bedroom door to bid Jan goodbye. He invited me inside where the drapes were drawn. I sat beside him at the edge of the bed. He looked very, very worn out. The old duvet with its white linen cover was pulled up to his neck. He withdrew his large, dry, bony hands with their neat nail, from underneath it, and took my two hands in his. We were eye to eye. I told him I was off now and he squeezed my hands. We spoke quietly for a bit, then I kissed him on both cheeks, told him to please get better and said goodbye. He whispered “Farewell.”

My heart stopped. At the end of our many visits, Jan had always said  “À bientôt.” [see you soon] when we parted. This time he’d said, “Farewell!” Because Jan was so reliable in all things (though I hoped it wasn’t so), I guessed this would be the last time we would see each other, that he was at the end and knew it.

He, Miep and I  had shared a deep and rich adventure during the past eight or so years, meeting, working together on what became the book Anne Frank Remembered. We’d held onto our hats and each other when the book unexpectedly became an international best seller, coming out the other end, tried and true, trusted friends. Besides publication of various editions in various languages, promotion tours and other Holocaust-related events, we visited each other several times a year — me to Amsterdam, they to Los Angeles.

When I phoned from the airport a few hours later, he’d drawn his lasts breath an hour before. Miep asked if I would come back into Amsterdam. Of course I would. By the time I’d cancelled my flight, hurried back into town to their apartment on Woestduinstraat, his body had been removed.

Jan’s birthday is today, 18 August. He would be 111 years old, as he was born in 1905. Though less well known than Miep who has become an icon, like Miep, Jan had contributed greatly and at great risk in helping with the protection and hiding of Anne Frank, her family and the others during those twenty-five dangerous months. Because those in hiding longed for visitors, Jan would climb the steep steps behind the bookcase up to the hiding place every lunch hour, bringing news, library books, friendly conversation, cigarettes for Peter’s father when he could. Anne writes about these visits, one particularly memorable visit that included a sleep-over. Anne writes of her admiration for Jan as he (and Miep) were young, chic, sexy, newly married and she had attended their wedding.

As it happened during those dark years, Jan was also a member of the Dutch Underground. Because of his (dangerous) connections he was able to obtain illegal ration coupons for the people in hiding which meant that desperately needed food for eight extra mouths could be acquired. In our book we touch on a few incidents relating to his underground work, but – generally – when I would ply him for more details, he would light a new cigar, shake his head, and look out the window, remaining silent about details of these activities. As much as I love prying information and stories out of the fading past, I also love leaving secrets alone.

In 2009 our original publisher Simon & Schuster planned a celebratory re-issue of Anne Frank Remembered in honor of Miep’s approaching 100th birthday. Because so much had happened in the Anne Frank world in the almost twenty-five years since its original publication, Miep and I crafted a new epilogue titled:

ON THE OCCASION OF MY CENTENARY

When those last words in the original epilogue to Anne Frank Remembered were written, my husband Jan (whom Anne called “Henk” in the diary) and I were considered old – my husband in his eighties, me in my late seventies. I could not have known that I would be lucky enough to live to my one hundredth year. Nor could I have imagined the strangeness I would feel at having outlived almost everyone who shared the terrible times with me including Jan who died on January 26th, 1993.

His hat still hangs alongside mine on our hat rack near the front door. His watch is still stretched out on top of the television set. There is an oil painting of him on one wall of my apartment and a painting of Anne on another. There is a framed photo of Otto Frank near the end of his life along with other photos of family and friends, awards I’ve received, mementoes, on various surfaces around the apartment.

The pieces of antique furniture given me by Otto Frank that had belonged to Edith remain. They include the large grandfather clock made in Frankfurt long ago that fills an entire wall. Near to the time Jan died, this clock stopped working. So far, no one has been able to repair it.

I am surrounded by memories but live entirely on my own, although my son, Paul, and his wife, Lucie, see to my well-being.

A little further on, about Jan’s secret life during the war, is written:

I knew almost nothing about my husband’s underground work other than the small bits and pieces that unfolded during the war. I knew he was able to get illegal ration cards for the people in hiding, which meant we were able to obtain food for them. When Paul or I tried to speak to him about his life in the war, Jan always said “I’ll tell you later, not now.”

But later never came. Jan died without revealing the full story of his underground life.

Because of research done by my son, his friend Gerlof Langerijs, and others since Jan’s death, I know now that he was a very active member of one of the underground groups made up of civil servants. These helpers sliced up the map of Amsterdam. Each of them would visit people in their slice as part of their work. They delivered goods, medical supplies, ration coupons, and whatever else they could. This was very dangerous work, and Jan was almost caught several times when he visited addresses that were betrayed to the Germans.

There was a violent part of his organization but if Jan ever carried weapons, I don’t know about it. Jan arranged hiding addresses all over town and also outside of Amsterdam. He must have saved scores of people, mainly Jews, but also men who did not want to have to work in Germany – Arbeitseinsatz – and other people who were sought by the Nazis.

He kept silent about this work, as did his fellow underground workers. On the day of his funeral, several men of his group were present. They shook my hand but kept to themselves and remained silent about their wartime activities.

My son regrets that we didn’t keep the pressure on Jan to tell. I am of the same opinion.

I understand Miep and her son Paul’s regret. But, if this is what this dear, gutsy, quiet man of heroic action chose, I’m glad he got his way. He died with his secrets. (As Miep did and, I, who like Jan get more and more quiet in this tumble down world everyday, hope I will too.)

When news of the German surrender finally came, everyone in the neighborhood wanted to go outside, light fires, dance and celebrate.

Jan shook his head, “No. I’ll stay here. I don’t feel like joining in the jubilation in the streets. Too much has happened in these five years to my country. Too many people have been taken away. Who knows how many will never return? Yes, I’m happy its over but I want to stay in and be quiet.” 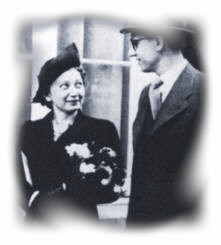 [Photos: Top: Jan’s photo on his identity card during the war.

« Pardon me, Roy, is that the cat that chewed your new shoes? » Worms eye view