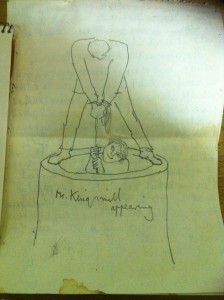 [[Drawing by A. Kingsmill]]

Excerpt from article In News by Alex Moore:

A missing woman on vacation in Iceland managed to unwittingly join a search party looking for herself.

Toronto Sun reports that a tourist group traveling by bus to the volcanic Eldgja canyon made a pit stop near the canyon park. The woman in question went inside to freshen up and change her clothes at the rest stop, and when she came back “her busmates didn’t recognize her.”

Word spread among the group of a missing passenger, and the woman didn’t recognize the description of herself. Next thing you know, a 50-person search party was canvassing the area, and the coast guard was mobilizing to deploy a search party of its own.

About 3am, some genius in the group finally figured out that the missing woman was actually in the search party, albeit in different clothes, and the search was called off. 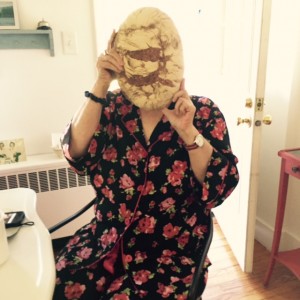 If you are not aware, we great-grandchildren of Holocaust survivors would like you, as someone we consider one of a dwindling number of guardians of those memories, to know that former SS Hauptsturmfürer Erich Priebke, mostly known for his extradition from Argentina to Italy in 1995 where he was convicted of war crimes that included the infamous reprisal slaughter of Italian boys, men, Jews in the Ardeatine Caves near Rome in 1944, who had recently turned 100, making him the oldest known Nazi war criminal, died a few days ago. He has been refused burial in his hometown of Hennigsdorf in Germany, also in his adopted country of Argentina.

I have just heard, in Italy too, by the Pope in person. We wondered if perhaps you might share our joy? If you might write a few words for our blog this subject?

Yes, it’s me! I’m over the moon to hear from you as I had never stopped wondering what happened to my sidekick, until I heard you’d died in a plane crash in Alaska – and my heart turned inside out. I’ve never stopped missing you and, though I’ve had many friendships of consequence, ours, as a marathon of joke-telling and unending childhood, has never been duplicated. Of course I remember you with your mismatched eyes, our beginning in my grammar school Lost and Found, and our many “adventures” as we (I can’t really say) matured, though what you write about seems as if it’s in another lifetime. Now I avoid setting fire to the drapes and am as un-outstanding as a tree frog. And am not kidding.

The me that wouldn’t mind a few last hurrahs and one last fishbowl full of vodka thanks you for remembering. Please tell me what’s become of dear You? Are you still funny? Do you ever have thoughts that your sell by date is fast approaching, as I do?

I’m about to leave for a visit to the Isle of Hydra in Greece where I stay in a small fisherman’s cottage. In two months I’ll be back in New York City where I am based. My deathbed duties (aunt, mentor, father, role-model, lover, mother) seem to be at an end for the time being as all of the above have passed on. With no more geriatric duties, I am free to travel anywhere anytime and stay for as long as I like. Please don’t delay in writing back. I’m very excited by the idea of seeing your face. That face from our many hours in the room in P.S. 31 with lost bus passes, pens, assignment books, gloves, behind the blubbering furnace. I’d forgotten that our friendship went on for so long, into our twenties to judge by the adventures you mention.

What happened? I have no idea. Neither why nor when. You seek to identify me with the writer known as “Alison Leslie Gold”; these days I’m seeking to do the same myself. An optimist – which I am not! – might say that this is because I’m in the process of becoming a different sort of writer.

Sat on right ankle during ten-hour flight to Athens.

Edith Frank look-alike across the aisle

Am just arrived on Hydra, and whacked, but I did want to let you know that my mother has died after ten roller-coaster years of illness. I was not prepared for how both my parents (who were extraordinarily healthy until their late sixties; in fact I don’t remember either ever missing a day of work) would suffer so many hospitalizations and illness in the last decade of their lives.

Our correspondence over these last years (in this time of email and instant messaging) has become a source of nourishment for me. Do stick close, Simon, let’s keep beating our drums across the miles. Or should I say, sticks on the ice, yours crossing mine.

There is a blight on geraniums on Hydra but a plethora of overgrown, thorny bougainvillea which is a plant you always told me you never liked. You always said it belonged in graveyards. Strange as it is, the geraniums – reds, oranges, whites, all – that hardy flower one simply pushed into earth and flooded with water to grow – no longer appear to bloom on the island.

Arrived at the house parched. Cicada noise is muted; mewing gulls too. The local cats do not look healthy, they stare me down, follow on my heal right into the house; they’re aggressive, unsympathetic.

Surely I have coarsened. Or is irritation just guilt on ice? One limping cat with a crushed foot known as “Olympia” waits unrelentingly outside my gate, like the man naked under his raincoat at the foot of the Spanish Steps in The Roman Spring of Mrs Stone.

The ankle-swelling has misaligned my knee so that I can hardly walk. Am in pain, especially on steps down (of which there are a lot as you well know).

Fell into my freshly made bed so that the inviting velvety blackness of the Hydra night could come close. Slept like a rock. This morning your crooked house glinted in the dawn light. The sun singles it out, while keeping the monstrous new villas nearby in shade. I lay in bed and read for much of the day away, listening as a fierce gale began to blow from the south, making the doors, windows, and shutters rattle, causing the canvas awning to snap. It coerced piles of rustling, dead bougainvillea blossoms, whose rich color had drained away, onto everything, even up onto my upstairs terraces and into my bedroom studio. When the wind eased up, I swept them through my courtyard, past the gate, down the stone steps, though most blew right back in behind me in a whirl.

“Swim!” you would command me. “Eat garlic, fresh lemons, defrost the borscht that’s covered in ice in your freezer, and down it even if it has been defrosted and refrozen twice. Read Malcolm Lowery again and be reminded of how fortunate you are not to have died under the pine trees at the bottom of your steps. Bring tangerines to the hag living in the hovel below the pines who hides from those neighbors she believes to be members of Golden Dawn, who has never recovered from childhood years of starvation during the German occupation, because of which her legs and arms hardly grew.”

Or maybe you would simply tell me: “Lie back. Your toenails need clipping. Take off your shoes. It’s a new moon, so wash your hair in sweet rainwater and untangle the knots bequeathed to you by your Siberian ancestors…”

A teetotaling Hydra pal stopped in for coffee. He told me that he had spoken to another old lady friend of ours in England whose mind is fading. When my name came up, Elizabeth exclaimed that I was one of her favorite authors: “I just love her book In Search of a Cabbage,” she had enthused. He enquired of me, in his British way, “I don’t believe I’m familiar with your In Search of a Cabbage.”

“Neither am I,” I replied, leaving us both scratching our heads, laughter bubbling up from my toes that hasn’t stopped yet.

When I’m feeling at all better, I shall take a swim. Then, if my bum ankle will allow me to stand upright and scurry back onto the rocks, I shall climb the mountain’s stone steps to visit your grave. Coffee or whiskey, which shall I bring you? Both, of course.

And yes, its getting late. Am donning my bathing suit right now before the wind reawakens. I risk being drowned not in the sea but in dry, colorless bougainvillea blossoms.

The sea clings. A citrus mist curtains off the sunset