I left New York at dawn; joined a rush-hour crowd on the E train at my corner; got to JFK; jumped on a 737, aisle seat. Five hours and fourteen minutes later we gently touched down at LAX, Los Angeles International Airport, a madhouse. The temperature was 104 degrees. I watched a smokey fire burning against the robbins-egg blue sky on the mountainous horizon as my indigo-blue Super Shuttle inched onto the freeway. (It’s always something dramatic in LA.) I was here to briefly visit my film-maker/writer son and lawyer/philanthropist daughter-in-law who are based in Los Angeles. They have two sweet rescue dogs (Sergio, who is blind, and Penelope). They’ve been together almost ten years. (Knock wood.)  Of course, mother-in-law jokes always come to mind. i.e. 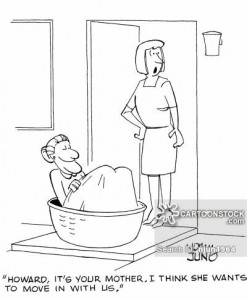 I can only hope I’m exempt from at least some of these clichés.  My daughter-in-law certainly is exempt, as she’s superlative. She was born in Brussels to a Belgian mother and Israeli father, an architect, who came from a line of architects. She grew up speaking French at home. When her parents emigrated to Los Angeles when she was five-years-old, she didn’t know a word of English.

“I remember the glory I felt when I began to be able to read in English. I started doing so when driving with my parents in their car.”

“Like I recognized the word ‘STOP’ on signs and names of restaurants… Dad read me the comic ‘Blondie’ in English and that helped too.”

As my son and daughter-in-law had moved, I was seeing their new place for the first time, a duplex off Melrose Avenue. My son was at work and my daughter-in-law walked me through the sprawling, pristine, and thankfully cool place. Looking through the window, she pointed to the house across the street, explained, “That’s where I grew up.”

“What a coincidence,” I commented.

“It truly is since while I lived there I had a kind of cosmic connection to this house, the one I live in now.”

I asked her how so and, over iced tea, she related this tale:

“As you know, I had no brothers or sisters while growing up. My parents were over-protected Europeans, so I wasn’t very adventurous. Often, in the evening, I would look out my window. One night I noticed a cat sitting across the street. I went out on my balcony, made shhhh-shhhh sounds. The cat crossed the street, walked toward our house. I snuck down, went to the cat, and brought her upstairs to my room for a visit.  I began doing this every night for the next weeks. One night I called the cat but she just sat across the street on the doorstep of this very house and wouldn’t move. I was distraught so I went down the back stairway of my house, out the back door. I was shoeless, wearing a ruffled white nightgown that had a light floral pattern. I remember the moon was full, the sky clear. I could feel the cool concrete with my bare feet. I picked up the cat, carried it home to my room and played with it. I wondered why she hadn’t crossed over to meet me. The next day I saw the cat in the daytime and went over to pick it up. A voice called out of the window, this window, Perhaps the owner. ‘Don’t pick up Charlotte. She’s pregnant.’ and I didn’t. Perhaps this was why she wanted me to come to her rather than she coming to me.”

“I’d always had a fantasy about living here. Coming here as a child I’d reclaimed a bold self I didn’t know I had. I was such a timid kid that braving the night and crossing the street barefoot in just a nighty on those nights long ago, exhilarated me, gave me a taste of bravery and courage outside of my sheltered childhood. And here we are! It was fate. Now I stand on the balcony here holding two adorable dogs, my husband nearby, telling the noisy neighbors to lower their music.”

She laughs. I do too. And then, the business of picking a restaurant for dinner begins. Following, a photo we took after dinner.