Jun 9, 2016 By Alison Leslie Gold in Lost and Found No Comments

[Today is the anniversary of Aunt Dorothy’s passing – June 9, 2009. RIP, dear Dorothy.  I walk by your building every day and think of you.]

Inside her apartment, it was peaceful, the light soft. Maggie (the sister you never met) and I went into the bedroom. The bed was askew (probably from lifting the corpse) but the sheets showed no sign of violence. A garbage chute not ten feet from the front door meant that disposing of rotting food from the refrigerator was easy. I emptied what remained in the seven bottles of pills into the bathroom sink and kept the hot water running until the pills of various sizes and colors had dissolved. We filled dozens of plastic bags with surface junk, phone books, a thousand hoarded coat hangers. One packing box was unflattened, reinforced with tape, labeled “treasures.” Found Dorothy’s H.S. diploma (Franklin K. Lane High School, Brooklyn, New York, June 1932), a small prayer book, crude, torn photos of my Russian great-grandparents looking like proper *mujiks.

Among the mass of papers there was information about Dorothy’s family that is no longer known by another living person. The birth date of my Russian grandfather Sam, as we knew him (or Zalmon as he was originally known), was April 15, 1892; he arrived in America in June 1910 from Brody, Russia, via Trieste; his profession, broom-maker; race, Hebrew; date of death, November 8th, 1969. Papers showed that my grandmother Minnie’s date of birth was never known to her. Her profession was listed as “Baker.”

We discovered the original of a letter written by my grandfather’s sister from Russia thanking him for sending $20 that she used to buy medicines for her sick child. The letter was dated August 17, 1939. Neither she nor any relative from Russia (but for one cousin of my father’s who fought with the Red Army for five years) would ever be heard of again. The locations were listed of each of the other graves in the cemetery where Dorothy had been buried.

Nancy (my other sister you never met) drove in from her B & B upstate. She arrived with large iced drinks and get to work. She and Maggie went through the clothes, dividing them into “vintage” and “give away” (a distinction I would not have been able to draw). When closets and dressers were opened, we realized that Dorothy had probably not thrown away a single article of clothing in her entire life. I found a pill box containing gold in the shape of crowns that must have been removed from her teeth when the time had come to get false ones.

I went through years of cancelled checks and bank registries, state and federal income tax returns. Finally, we stopped, planned several dates on which to return and continue. It seemed that though we’d worked the better part of the day we’d barely scratched the surface.

I left wearing a gold deco ring with two stones: one mauve, one pale yellow. As someone who was also set against throwing anything away, Lily, you would have felt for my Aunt Dorothy. 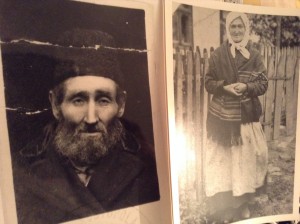