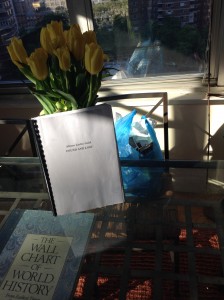 Following, a glance into the draft of my new book (working title)

– a quaisi-biographical epistolary collection meditating on six years and six deaths, future work in this crumpled world, life after the death of loved ones. A few lines from

Part V – A Curtain Blows into a Room

Saw a bin of basketballs at Gristides market. Couldn’t resist buying one

Were you aware that the Imam of the Grand Mosque of Paris helped Jews during the war? Was told about a survivor from Budapest who searched for his family until he died at age 95. He has achieved enough in his life to warrant the impressive obituary that caught the attention of a nephew who had been tirelessly searching for his uncle all his life. Now it is too late.

Read of a survivor of Birkenau (Mr. Nachshon) whose number has been copied onto a young person in order to memorialize him. His family gassed, he survived. What struck me about the interview with him, more than the discussion of tattoos, was his comment that, despite the passing of seventy years since the events, he continues to dream about it every night. Every single night. The dream is always the same. In his words: “Many times we’re running away from the Nazis. Sometimes the whole night we were running. Maybe this time they won’t catch me.”

BTW: Was offered a job (hope you’re sitting down) for a new translation from German of Bible stories for children. (Ironies in abundance, not least as you know my views on religion.) Not as much money as I’d like but enough to sustain me through the coming year in Yellowknife. Much as I’ve bullied you, circumstance has seen to it that I, not you (!), will be the next Jacob wrestling with the Angel.

And speaking of returns: The grey wolf and the white-tailed eagle have both come back from near-extinction. Also the ever-embraceable, ever-dancing, ever-ordinary brown bear.

Pale moon of no color. Found a piece of white chalk – always a stub in Dad’s pocket – on a seat of the E train. Put it in my pocket

Glad you won’t be trapping rabbits for dinner up there in your woody hideaway. Truth told, you’ve always been more of a Jacob than me.

About Mr. Nachshon: Yes! Maybe this time they won’t catch him!

Miep often described how, every time she and Jan were invited to see a stage play of The Diary of Anne Frank, just as the curtain was about to rise, she would catch herself wondering: “Maybe this time things will end differently.” Later, when the curtain had fallen, her heart would sink, the play having ended the same way as always.

On a different note but from the same tune: during the hiding time, and from then on to the end of her life, Miep also told of a recurring dream: In it the war would end, she would throw open the door to the hiding place, make a wide gesture with her hand, and command the occupants: “Now go home!” I imagine, in some other dimension, Miep, Jan, Anne, Otto, Edith, and Margot sitting drinking coffee and eating lemon cake, with curtains pushed aside, open windows, shaking their heads at what has become of the world; Dorothy and my father around a kitchen table with his family of origin eating boiled chicken and his mother’s famous buttered noodles and arguing about what has become of Labor Unions in America; Francine loading her beloved Alsatian into her Mercedes for a brusque walk under the Pyrenees; Denny putting down her sharpened pencil, picking up the phone and dialing me to plan lunch at a Chinese place; Lily standing in her kitchen on Hydra in an old, black bikini bottom, slicing garlic to add to an omelet of feta and tomato bubbling in olive oil over a high flame on her two-burner cooker, quoting a favorite William Empson poem with the line “The waste remains, the waste remains and kills.” You see, under it all, am not a wrestling Jacob but a six-year-old playing ball until dusk becomes night when I can’t see the ball anymore and it hits me in the face.

Have met a someone online. We will meet in two weeks.

It is the 50th anniversary of the Cuban Missile crisis. Hurricane Sandy, a slow-moving, 900-mile-wide “hybrid” hurricane(whatever that may signify) is blowing through 23 states at damaging speeds having (they say) the lowest pressure ever recorded, causing floods, blizzards, rain, gusting winds. You’ll have seen it on the news, no doubt, and I am here to remind you it is true.

In New York, gazing out from my window, the city is entirely dark, almost black, no streetlights, only taillights given that 9th Avenue is one-way heading south. The reason I’m not afraid is that when I was a child and expressed fear of the dark, I remember my father saying, “The dark is friendly.” And explaining how it was more black velvet then something to be feared.

Snow goose weathervane with unlit fairy lights around it 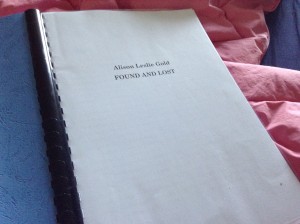