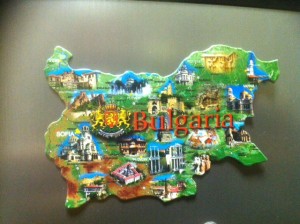 After two weeks in Dublin, five weeks on Hydra, my friend Dan bullied me into accompanying him to Bulgaria. I resisted the pressure for a week and finally (because he was also helping me edit a new piece of work*) he used his PhD in bullying to a good end. I blew off my return ticket to New York. Instead, Dan and I flew from Athens on a small spritely prop-jet to Sofia, rented a car, sat in it waiting for Kristina (Dan’s partner, my friend too), to arrive from Paris. (Meanwhile working on the ms.) When she touched down, we three filled our pockets with Bulgarian Lev, and drove along the highway to the City of Plovdiv once called Philipopolis when Philip of Macedon conquered it in the 2nd century BC. Along the way we passed vast clusters of blooming lilacs, blooming roses in profusion, mustard-colored grape seed fields, forests, mountains off in the distance in the direction of the Greek border.

We settled into Plovdiv’s Old Town, high on a hill. (In my hotel’s breakfast room were great stones from 1st century Roman ruins. More work on the ms. there too.) Povdiv is Kristina’s home town. As it happened, our visit coincided with Orthodox Easter (1 May this year). Our week-long visit included a traditional Easter meal with Kristina and Dan, Kristina’s parents, Dincho and Ivanka, as well as with her grandmother, Maria, called Gran, who is so old no one knows her age anymore. Beside Easter, we ate just about every meal together in the family apartment overlooking central Plovdiv’s tall treetops during which I experienced hospitality and warmth the likes of which I’ve rarely felt before. (One small but touching example: To make me feel more at home, salt and pepper shakers in the shape of the Statue of Liberty were part of the table setting.) Our Easter dinner of slow-cooked lamb and colored eggs was sublime. But so were all meals, all dishes, all soups, deserts, salads, meats, all flavors – unparalleled. 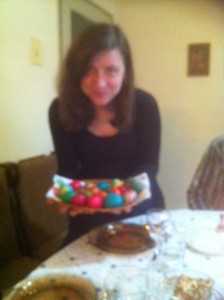 Though I speak no Bulgarian and Dincho and Ivanka hardly spoke more than a word or two of English, our many gatherings around their dining table were never stiff. Dincho told stories, Ivanka added charming counter-points while Kristina patiently translated phrase by phrase, including an occasional comment or story offered up by me, so nothing was lost.  Dincho comes from the village of Krasnovo an agricultural area north of Plovdiv. His family were landowning people who grew wheat, rye, barley, vegetables and had forests as well as hundreds of honey producing beehives. After the WW II ended, his (and all) land was socialized and became a cooperative. At some point the hives were set on fire by a spiteful worker who resented those who once owned land. 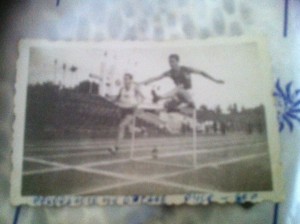 In his youth, Dincho was an athlete, the 400 meter hurdle his specialty. He became Bulgarian national champion in 1960 and traveled the world in competitions. When his sporting days were finished, he studied agricultural management and became a director of a regional grain producing company. Dincho and Ivanka met at a party. He confesses that the moment he saw her he knew she was the one for him. Ivanka was from a well-to-do Plovdiv family, had a passion for science. She had lost her father when she was quite young so her mother, Maria, had become a nurse to support the family. Ivanka studied bio-chemistry and later became the director of a lab that kept control of (and monitored) all the drinking water in the region. They had two children, Steve, first, then Kristina next. 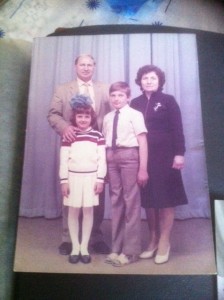 The family adjusted when communism came in 1945, and – in 1989 – when communism went, and inflation sky-rocketed to 2000% making all savings almost worthless, the family also bore up. For five years Dincho fought to get some of the Krasnovo land restituted; and, in 1995, succeeded. In 2007 he was able to own bee hives and the whole family helped with their tending. Kristina assisted by centrifuging the honey, Ivanka would scrape the honey combs even though it made her nervous when bees got into her curly hair. There was enough land  for a vegetable garden, a profusion of tomatoes, also for roses and other flowers, fruit trees too.

At our first meal I mentioned how taken I was by the wild roses I’d been seeing since my arrival in Bulgaria. Kristina explained that I was seeing the thirty leaf Bulgarian May rose. How much I would love to take a cutting of this rose back home to my sister for her birthday, I pined. Ivanka and Dincho said that if they could get to their land in the next days, they would see if they could get me a cutting to take back. 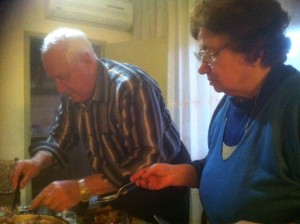 Each meal was a banquet. My special favorites (all home made, naturally), Luteniza – home grown tomatoes and sweet peppers, baked, roasted on a fire, cooked down, thickened. Out of this world! Yogurt and cucumber soup. Sublime! Home made baklava – shiny with honey made by the family bees. Beyond description! Between meals – walks through the Old Town, a trip to Bachkovo Monastery founded in 1083, yellow hand-made candles lit in various Ortohodox Churches for dead loved ones. And, of course, work on the ms. until (on our final afternoon), we transferred it to a memory stick after which Ivanka led us to a copy shop where bound copies of a completed draft were produced. (This piece of creative non-fiction tentatively titled: *Found and Lost.) 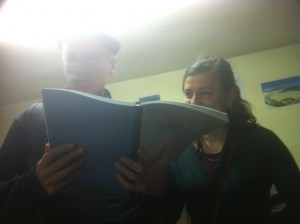 On our last evening after our luscious meal, Ivanka, Kristina and Dincho presented me with gift after gift, each accompanied by a conspiratorial smile. A cornucopia of their home made goodies passed from their hands to mine: A jar full of fresh Luteniza. A plastic water bottle filled with pale amber honey. Another with dark mocha-colored honey. A plastic bottle filled with clear Rakiya (much like Turkish Raki or Italian Grappa), made using their own tiny plums. Bags of herbs. Ceramic bowls. Rose perfume. Rose soap. And the grand finale, two small wrapped-moistened, ready-for-travel, Bulgarian thirty leaf May rose bushes, one pink, one red.

It was necessary for me to buy an extra suitcase.

After a trip by car to Sofia, an airplane ride to Istanbul, another to New York (my pockets still full of most of the original Bulgarian Lev ready for another visit), all arrived safely. Not a drop spilled, not a glass or branch was broken … 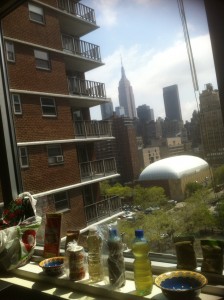