Apr 17, 2016 By Alison Leslie Gold in The Potato Eater, The Woman Who Brought Matisse Back From the Dead 4 Comments 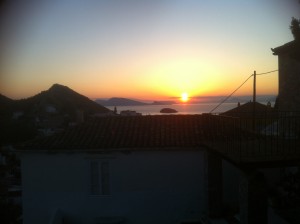 Having calmed (I thought) my young, neglected novella along with my eleven other disturbed creations the other night, I entered a period of empty-headed wellbeing that, unfortunately, was rudely interrupted just now just as the sun was sinking into the Aegean Sea. I heard a disturbing sound that made the hair on my neck stand up straight. I could hardly believe my ears. Again, it emanated from the tall bookcase in the old house. Perhaps a mouse, or several mice, were chewing on Alice Munro? This is the sound. Have a listen: [The sound]. Opening the cabinet’s double-glass doors, I realized it was the sound of tearing paper. These were the culprits:

The Woman Who Brought Matisse Back from the Dead and 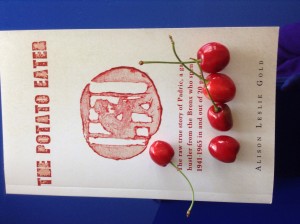 After I’d separated them, I saw they had been in the midst of…I can hardly admit it…tearing out each other’s final pages.

Why, I demanded, sliding M.G.Le Clézio’s Desert between them to keep them apart. Why destroy endings I worked so hard to complete?

Would you prefer if we tore off a cover, or the first lines…? Came the answer – a question answered with another question.

Or pages mid-book, just as plots and characters, and emotions are building?

No. Not that either.

Then what would you have us tear out?

How about … nothing … Or, if you must … the copyright page?

How about posting our publisher’s Flap Copy?  You posted your sniveling novella’s Flap Copy the other night. What are we, chopped liver?

Okay. If that’s what you’d like. Consider it done. [see below]

Flap Copy: The Woman Who Brought Matisse Back from the Dead

In The Woman Who Brought Matisse Back from the Dead, award-winning author of Anne Frank Remembered and The Devil’s Mistress, Alison Leslie Gold presents the life of nun-cum-artist’s model Claude Boule. Inspired by a true story and told in spare, evocative prose, this improbable, color-soaked life arc spans the art of Henri Matisse and Andy Warhol, a convent in 1930s Nice, wartime Lyon, postwar Paris, New York in the dazzling 60s on to millennium’s end. The Woman Who Brought Matisse Back from the Dead explores the abstruse relationship between artist and model: Who transfixes whom? The incidental, often travail-filled, life of Claude Boule – impenetrable and inscrutable – serves as a poignant foil for intimate views into the creative processes and behind-the-scenes life of one of the 20th century’s most momentous artists. The brash assemblage of The Woman Who Brought Matisse Back from the Dead also encompasses diverse uncelebrated but no less vividly tinctured people whose lives were touched – erotically, devoutly, unscrupulously and in other often unpredictable ways – by the model’s.

Padric McGarry was the surviving twin born in 1925 to the unwed 15-year-old daughter of Irish immigrants. Raped at the age of seven by an older boy, he learned early during his Bronx childhood to use his wits and good looks to hustle and steal at every opportunity. He eventually did time in twenty prisons across the US, where McGarry improved his criminal skills and snatched moments of comfort with Miss Scarlet and other queens in the “Homo Blocks.” The Potato Eater is an unsentimental biography that offers a stark, unembroidered view of the intersection of gay and prison cultures. For this unapologetic and often darkly comical account of a rootless life at the bottom of the heap, award-winning author Alison Leslie Gold drew on interviews she made with McGarry in the 1970s, as well as his letters and his own notes. McGarry died, with two years of sobriety, in a halfway house in San Diego in 1982. From an audio tape made in 1977 in New York City: “I was 16 when I was arrested for corrupting the morals of soldiers and sailors, blocking a public doorway, and disturbing the peace. In prison I began to grow up and learn. I learned how to pick pockets, how to open five kinds of safes, how to forge checks, how to work second story, how to boost. We’d practice there. I learned all the necessary things to spend 20 more years in different prisons. Riker’s Island was my Junior High School. Sing Sing and Dannemora State were my High Schools. The chain gang and Leavenworth were my colleges. Immediately I had ‘Homosexual, Degenerate, Cock Sucker’ stamped on my records so I was rarely in population with the rest of the men. I was kept in segregation with junkie queens, wino queens, booster queens, prick peddlers, drag queens and some men who just preferred to be in the homo block where they were adored and given sexual comfort. Life in segregation with those mad sissies was like being caged with a mass of mad, screaming peacocks.”

And there you are. Are you satisfied? I queried, wanting to get back to my sunset before the light had totally drained from another seamless day.

There was no reply, so I repeated the question.

Again I heard nothing except Virginia Wolfe sighing or perhaps it was Jack London dreaming of dining on hardly-cooked hare. I shut and hooked the glass doors, then, hurried upstairs to the terrace. Unfortunately, when I stepped outside, night had fallen and the mosquitoes had entered stage left. 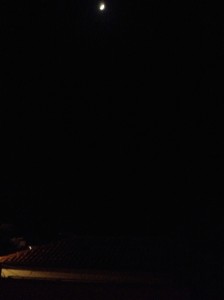