A question I’ve been asked often during talks I’ve give on Anne Frank Remembered, co-written by Miep Gies and myself. [see photo below, Miep and I in Holland just before her 100th birthday]. The question: Why did Anne rewrite her original diary, change names, do various versions? It’s answered here. Taken from The Writer’s Almanac, sent by Andrea Vaucher. (P.S. The hundreds of pages of loose paper she wrote on were provided by Miep.) 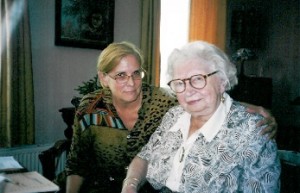 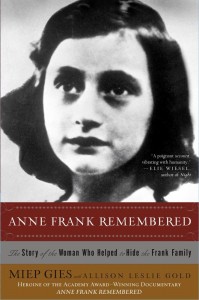 It was on this day in 1944 that Anne Frank made the decision to rewrite her diary as an autobiography. Almost two years earlier, in June of 1942, Anne’s parents had given her a red-and-white-checkered diary as a 13th birthday present. A few weeks later, Anne’s sister, Margot, received a notice to report for a forced labor camp. The next day, the family went into hiding, moving into rooms above the business office of Otto Frank, Anne’s father. Otto’s business partner came too, along with his wife and son, as did a dentist. From the beginning, Anne recorded her daily thoughts and feelings in her diary, which she nicknamed “Kitty.” Once she filled the original checkered Kitty, she wrote in a black-covered exercise book, given to her by the non-Jewish friends who also took food and supplies to the families in hiding.

On March 28, 1944, the group who lived in hiding together gathered around a contraband radio to hear the news broadcast from London by the Dutch Government in Exile. The Education Minister, Gerrit Bolkestein, encouraged ordinary Dutch citizens living under the Nazi occupation to preserve documents for future generations. He said: “If our descendants are to understand fully what we as a nation have had to endure and overcome during these years, then what we really need are ordinary documents – a diary, letters from a worker in Germany, a collection of sermons given by a parson or priest. Not until we succeed in bringing together vast quantities of this simple, everyday material will the picture of our struggle for freedom be painted in its full depth and glory.”

The next day, Anne wrote in her diary, describing Bolkestein’s speech. She wrote: “Of course, they all made a rush at my diary immediately. Just imagine how interesting it would be if I were to publish a romance of the ‘Secret Annex,’ the title alone would be enough to make people think it was a detective story. But, seriously, it would be quite funny 10 years after the war if people were told how we Jews lived and what we ate and talked about here.”

Frank went back through two years of entries and painstakingly rewrote them. She assigned pseudonyms to her family and the other members of the Secret Annex, and she edited for clarity, character development, and background. She decided that after the war, she would write a memoir called Het Achterhuis, which translates as “the house behind,” or “the annex.” She would use the diary as its basis. She wrote: “I know that I can write, a couple of my stories are good, my descriptions of the ‘Secret Annex’ are humorous, there’s a lot in my diary that speaks, but whether I have real talent remains to be seen.” She wrote again and again about her desire to become a published writer – a journalist or novelist – and questioned whether she would succeed. At one point she wrote: “Everything here is so mixed up, nothing’s connected any more, and sometimes I very much doubt whether anyone in the future will be interested in all my tosh. ‘The unbosomings of an ugly duckling’ will be the title of all this nonsense.”

Even while she rewrote her original diary, Anne continued to add to it, now with an audience in mind. In the spring and summer of 1944, she filled more than 300 pages of loose paper with this revised work. She was still working on it when the Nazis raided the secret annex in August of 1944, acting on an anonymous tip, and sent all of the inhabitants to concentration camps. Anne died of typhus in Bergen-Belsen concentration camp in 1945; of the eight members of the secret annex, only Anne’s father, Otto Frank, survived.

Miep Gies was one of the Franks’ friends who had helped them during their years of hiding – she and her husband were active in the Dutch resistance. After the annex was raided, Gies found Anne’s writing and kept it in her desk, hoping to return it to Anne herself. When she learned that Anne had died, she passed it on to Otto, who edited and eventually published his daughter’s story.