Am onto new work that has briefly taken me to Ireland. Dear, beautiful Ireland! I hadn’t been here since researching Clairvoyant (my homage to James Joyce and his long-suffering daughter Lucia, just reissued by TMI Press), to visit Mrs. Nora Joyce’s cramped childhood home in Galway. That was quite some time ago. Although I’ve only just arrived, it’s obvious that Ireland is altered. Dublin Airport could be Oslo or LAX, the Irish don’t look like the Irish anymore in the same way the French don’t look French and Greeks no longer look like Greeks. Folks everywhere seem (regrettably) interchangeable as if all have jumped out of the same LL Bean catalogue. Happily, though, the famous Irish hospitality/warmth/humor is, as before, alive and well. I’m here to begin research for a new piece of work on childhoods and spent this morning interviewing a Dubliner named Susan R who shares the same name as her mother, also Susan R, who sadly died at age 57. Big Susan, Little Susan. Little Susan told me her mother continued to love a man who abandoned her to the very end of her life. (The song “Yours” was Mammy’s favorite song.) Promising to tell me more about her mother and her own childhood, she did so over a real Irish breakfast:

The mother, from Ringsend, Dublin, had tawny-brown hair and light blue eyes, was tall with high cheekbones. She married at age 18. The man she married owned a shop that sold prams, was ten years older then she was. Quickly there were two children. When Susan was 22 (1947) that husband packed a suitcase and said he was leaving. She didn’t believe him, knew with certainty he’d be coming back, so, on Saturday night she bathed the children, cooked a meal, and waited up for him. He didn’t come home. She drifted into sleep while the lightbulb burned brightly. Susan did this every Saturday night for six months, still certain he’d return. Finally, she received a letter from a solicitor telling her to come to see him. Once there, she was given a Deed of Separation, also a settlement of 400 Pounds. Only then did she realize he wasn’t coming back. She went home and got under her covers. She stopped eating, stopped washing, couldn’t get out of bed. When a doctor bent over her, she told him she had nothing to live for. The doctor brought in her children and said: This is what you have to live for.

Susan: The financial settlement was quite a lot in those days. If Mammy had been more money savvy, she would have paid off the mortgage, but she knew nothing, and the money began slipping through her fingers.

Susan calls her Mammy or Ma. As there was no divorce in Ireland at the time, her mother was considered a married woman by the state, by the church, thus no family benefits could be had. She was bewildered by her own circumstances until, one day while her she was out washing her windows, an older man who lived around the corner named Mikey chatted her up. Soon Mikey asked if she’d mind his two kids while he was at work as his wife had also deserted him. Susan said yes, then began cooking meals for Mikey and his kids.

When she discovered she was pregnant by Mikey, her mother, Granny Annie, and the Parish Priest, Father Horgan, ordered her not to let Mikey in anymore as she was still considered a married woman and Mikey a married man.

Granny and the Priest arranged that the newborn would be taken away and put up for adoption. While she was pregnant, she lost her house, became destitute. A large mysterious sum had been withdrawn from her settlement. Perhaps it was Mikey? It was never discovered to whom she’d given the sum. My brother was temporarily taken in by one of her 14 siblings, and my sister was put into the Sacred Heart Home (orphanage). The only place Ma could go was a Night Shelter for the homeless and destitute until a kind neighbor, Mrs. Hanlon, with five or six kids of her own, took her in.

When Little Susan was born (1952), a confusion was created by an unexpected change in nursing staff when the nurse wasn’t informed that the newborn couldn’t to be taken to the mother as it was being given away, so Little Susan was put into her mother’s arms. When the mistake was discovered, Susan refused to give up her baby. Even when the parish priest came to the hospital to persuade her, she refused. If she could manage two children, she could surely manage three, she told the priest and the others.

When released from the hospital, she was able to acquire a one-bedroom flat in Mt. Pleasant Buildings in a squalid part of south Dublin called Ranelagh. (Maureen O’Hara was born in this neighborhood, so was writer Maeve Brennan.) Here Susan and her three children remained for several years, hoping that one day they could be assigned a house for which they had applied. A nun at the nearby convent, Sister Coleman, a teaching sister, became aware of their plight and was able to pull some strings that enabled the family to jump higher up on the house queue than they should have been.

Susan: On the day the letter bringing news of the house arrived, Ma was baking. She got so excited she threw the basin of flour up in the air.

The allotted house was in a new area south of Phoenix Park called Ballyfermot – part country, part suburb. It was a corner house on Carna Road with two bedrooms, a large front garden, a smaller back garden, a stairway, which was a novelty to the children. The house was at the end of a row of 15 like houses, facing a row of 15 more and the two older children could walk to their school. A Vincent de Paul man, Mr. Selby, and his wife, Mrs. Selby, took an interest in their plight and surreptitiously gave Susan a job cleaning their house. This suited her, as she could bring the baby with her to work. The small remittance she received from the Selby’s was her sole source of income as she was still deemed a married woman, not allowed benefits, or allowed to work.

Another nun, Reverend Mother Attracta, had befriended my mother when she was pregnant, and the friendship continued even when the family moved.

How did your family get by, I asked this morning, an overcast day in Dublin, while we got full on fried eggs, mushrooms, tomatoes, pudding, bacon, fried bread and drank coffee.

When it was time for me to make my First Holy Communion, Mother Attracta paid for my white communion dress. 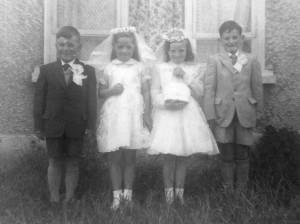 She also arranged for Mammy to receive a fortnightly parcel in a brown paper bag. In it – sugar, margarine, tea – and more important, in the parcel was an envelope containing 10-shillings – one red banknote in a brown envelope. Later it was increased to a one pound note, a green banknote. It helped us a great deal.

How did you get this parcel?

First my sister picked it up, then my brother, then, when I was a bit older, I did.

Yeah. When I rang the doorbell, one side of two-sided, tall, wooden doors opened up to reveal a small petition with bars on it through which I could see a short nun in a black habit. This was unusual as the other nuns in the convent all wore blue and white. When I asked for our parcel, if it wasn’t ready, the nun in black pressed a buzzer that opened a door into a hallway. To the right was a big room where I was told to wait.

The four corners of the room consisted of straight backed wooden chairs. On the left, a large glass cabinet displaying Priest’s vestment’s in different colors – green and gold, wine and gold – sewn by the nuns. In the middle of the room, a big wood table. Under it, a Persian rug covering half the wooden floor. I can still smell the musty, tarty, raw wood of that table. I would sit in one of the hard chairs facing two tall windows. 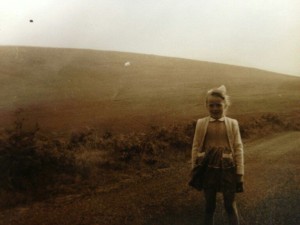 Eventually, a nun came in with the brown parcel. I’d immediately look inside for the envelope. If it wasn’t there, I’d ask for it. I knew Mammy had to have it. Then the nun would go off to get it. And I’d wait…

Yeah, it was awfully long. They’d forget about me. Also included in the parcel was a weekly butchers docket.

For the same butcher from which the convent got its meat.

Yes. On Saturday morning I would set off with the plastic shopping bag on my skinny arm to collect the parcel and collect the meat. With the docket we got 10-shillings worth of meat. I also got friendly with a girl who worked at the butchers and I’d ask for extra rashers, sausage and pudding too. It was a challenge to get the extra bits. The girl would wrap it all, even though this was way over the 10-shillings limit,

and would tell me to go tell the cashier that it was meat for the convent. Coming out, I would feel elated because we’d have enough for sunday breakfast and a roast for sunday dinner. I needed to take two busses home but often skipped one, and walked, in order to save enough to buy a coronet (cone) of vanilla ice cream at Woolworth’s for 4-pence. Sometimes I even had a few pence left while I browsed around the musty old second hand bookshops, or wandered through the city looking into shop windows and finally get the bus back to Ballyfermot.

Let me go back for a minute. How often and long did you actually have to wait for the parcel?

It happened about half the time. Sometimes I’d have to wait four to six hours. When it did, I’d sit in a chair facing the tall windows. Outside were trees in a park opposite. Through the years I’d watch the seasons change. It was so quiet you could hear a pin drop but through the walls were sounds of the nun’s big brown beads rattling, the swishing of their habits, the jiggling of their keys as they locked and unlocked doors. Each time I heard a key in a door, I hoped one of them was coming to me with the parcel so I could get the hell out of there…

« Turning the page » Another shoe drops