My son was born during a transit strike

According to the Socialist Workers Party, the transit strike that winter trumpeted the still vital power of the working class as 36,000 workers walked out on the 2nd day of the new year. [see The Militant by Farrell Dobbs] Not one subway, bus or ferry moved for 12 days, paralyzing the city during a very cold winter. One of the union leaders, Irishman Mike Quill, about to be arrested despite poor health, told the press: “The judge can drop dead in his black robes. I don’t care if I rot in jail. I will not call off the strike.” That’s how union leaders spoke in those days.  And, off he went to jail only to (shortly) be whisked to hospital, and by month’s end, die a martyr’s death. 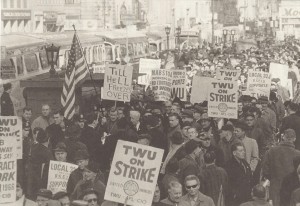 On the evening of the 6th of January, I, who at age 20 cared nothing about strikes or politics or current events or anything unselfish, was watching an old Bette Davis movie from 1944: Mr. Skeffington

— [Claude Rains: Do you think I’d ever have looked at another woman if I’d received one grain of affection from you? Bette Davis: I’m sorry. I’m really sorry I can’t love you. CR: That’s alright Fanny, you can’t really love anyone. BD: I can’t bear to look at you Job, your eyes have such a hurt expression. CR: A woman is beautiful when she is loved. BD: A woman is beautiful when she has 8 hours of sleep and goes to the beauty parlor every day.] —

when labor pains eerily began. (Yes, I was pregnant.) Timing the twinges as instructed. I couldn’t imagine the time had really come. Around 9:30 pm wrenchings were strong enough and close together enough for my red-haired doctor (Dr. Berk) to order me to go to the hospital. I wen to University Hospital, a newish construction beside the East River, was driven there and put into the hands of a nurse. Becoming unsettled because the nurse was nibbling on a tuna sandwich while examining me, I was sent to the communal labor room where a variety of women were in various stages of labor. Accurate or not, that’s how I remember it.

The evening wore on, then the night did too. Between pains, in and out of a hospital bed with a railing, I wandered aimlessly trying (for modesty’s sake) to hold the white (maybe it was blue or candy-striped) cotton gown that had flimsy ties that barely went around my girth closed. (Yes, I was modest.) Looming outside the window was the 59th Street Bridge, its cables lit. Through the night, the lights of an unbroken line of vehicles trying to thwart the strike inched their way into Manhattan from Queens. At dawn dirty murk faded into a pale blue winter sky. I must have been given something or else the pain put me into an alternate reality since I started going in and out of consciousness, lost track of time, later, total amnesia about everything that came next.

The sky was darkening once more when I came to. I was in another place, I didn’t know where, but could see the 59th Street Bridge gridlocked with the same unbroken line of headlights pointing one way and red brake lights the other, the last light of day had left orange wiggles on the river below. I was told it was January 7th, as it is once again. A smiling white-clad nurse stood over me holding a package wrapped in a blue blanket. She came very close to my face, unwound the wrapping, and lifted out a perfect alabaster sculpture, translucent yet durable. She pointed to one of its feet. Counted the toes: 1,2,3,4,5. She pointed to the second foot. Counted the toes: 1, 2, 3, 4, 5. She held out a minute hand, counted fingers: 1, 2, 3, 4, 5. Did the same with the other hand: 1, 2, 3, 4,5. Said: He’s perfect.

…Of the dark past

A child is born;

With joy and grief
My heart is torn…

And, truly, my heart was torn. He was perfect; and is, as perfect, as much of an alabaster statue now, of museum quality, as he was then.

Happy Birthday to my priceless monument who remains the most meaningful and lovable and valuable gift offered to someone as undeserving as me during my otherwise ragtag life. 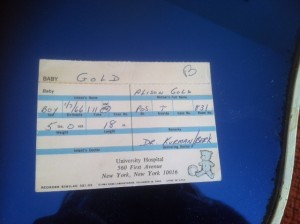 « Erasing the holiday » The last time he saw his mother, Mary