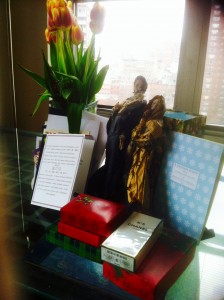 Put away scotch tape, scissors, two kinds of wrapping paper. Cross out names of dead or disappeared from card and gift lists. Return lists to folder in filing cabinet. Tear interesting stamps off cards received to bring to Bill P. in Greece for use in collages. Tear up envelopes, add to bag of used wrapping paper, ribbon, packages. Discard dead tulips. Put away vase. Put rubber band around cards received. Bolster will power in order to discard as many cards as possible. Leave those remaining in rubber band and try to sacrifice a few more tomorrow. Stop eating Lindor Peppermint Extra Dark Chocolate Truffles. Stop eating Granducale Panettone from Italy. Give leftovers to neighbor. 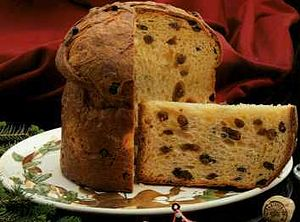 Turn off string of colored lights twisted around postcard rack. Untangle green wire; wind up light string. Put away in linen closet. Put a touch of Evidence Essential Oil from France smelling of patchouli, bergamot, rose and jasmine on each wrist also a smear on back of neck for good measure. Take long transporting sniff. Use dust buster to suck away bits of currants, candied orange/lemon peels or zest and other crumbs from Panettone. Take bag full of paper residue downstairs to recycling. Take scale from linen closet; put in bathroom. Take string of colored lights back out of linen closet and restring around postcard rack. Make list of Thank You notes to write. Return Ten Commandments to refrigerator door.

Relief at holiday’s end is palpable. How things have changed; at one time the end of a holiday was like the end of the world. Remember? Think of: A Song on the End of the World by Czeslaw Milosz, [translated by Anthony Milosz]. I’ve substituted the word holiday for the word world, forgive me Czeslaw.

A Song on the End of the Holiday

On the day the holiday ends,

A bee circles a clover

A fisherman mends a glimmering net.

Happy porpoises jump in the sea,

By the rainspout young sparrows are playing

And the snake is gold-skinned as it should always be.

On the day the holiday ends

Women walk through the fields under their umbrellas,

A drunkard grows sleepy at the edge of a lawn,

Vegetable peddlers shout in the street

And a yellow-sailed boat comes nearer the island

The voice of a violin lasts in the air

And leads into a starry night.

And those who expected lightning and thunder

And those who expected signs and archangels’ trumps

Do not believe it is happening now.

As long as the sun and the moon are above,

As long as the bumblebee visits a rose,

As long as rosy infants are born

No one believe it is happening now.

Only a white-haired old man, who would be a prophet

Yet is not a prophet, for he’s much too busy,

Repeats while he binds his tomatoes;

There will be no other end of the holiday

There will be no other end of the holiday.

« “It won’t always be this bad.” » My son was born during a transit strike