I dedicated my first novel Clairvoyant, the Imagined Life of Lucia Joyce  (the story of James Joyce’s daughter Lucia Joyce, who spent 47 years in mental hospitals), to an Irish nurse friend. At the end of my Author’s Afterword I wrote: … This book is dedicated to all kind, caring nurses around the world especially Nurse A.G. Kennedy…whose loving care altered this author’s life. An understatement, actually, since I credit Nurse Kennedy – Anna – with saving my life at a long-ago vortex. (Details at some point down the road. Perhaps.) Maybe this is when my soft spot for nurses, and also for the Irish, began. 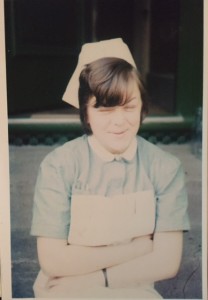 Anna (we met at the beginning of the 70s), always insisted she would retire in Ireland. But, when the time came, almost no one she knew was still alive there and the plan faded away. She lived in a rent-controled apartment on Bleecker Street. Around the time she retired from nursing, I was again based in New York. Another nurse friend, Andrea (also Irish, originally from Belfast), Anna and I, began having dinner together every couple of months, like clockwork. Because Andrea still worked (on a geriatric psych ward at a local hospital) and her shift ended 4ish, our meals were scheduled on the early end. At first we met at restaurants but soon began to meet in my apartment. I would cook or order in; Andrea would bring wine, other drinks; Anna always brought pastries from Pasticceria Bruno on LaGuardia Place. There was nothing I prepared through the years that Andrea and Anna didn’t eat with relish. (You’d have throught I was a great cook, which I’m not, they’re just appreciative and good eaters.) They’d usually leave by 6:30. In the last 4 or 5 years Anna started speaking gibberish. She was losing weight, was often unkempt. Long story short, she was diagnosed with advanced Alzheimer’s. Our get-togethers continued. Anna somehow was  able to make it to Chelsea from the Village every time while Andrea and I held our breath waiting for the inevitable shoe to drop. In November, on the afternoon/evening of our last gathering, Anna didn’t show up. We waited and waited, then ate. Just us two. After the next shoe dropped, Anna’s guardian took her to live in a ‘home’ on Staten Island while the guardian, Andrea and others in the inner circle began dismantling her apartment.

Yesterday, a foggy, too warm day two days before Christmas, Andrea and I met at the Ferry terminal and traveled to Staten Island jumpy with trepidation. No sad story follows, since we discovered that Anna’s good nature, like cream, had risen to the surface. She was clean, safe, knew everyone, everyone knew and already loved her. Her anxiety had diminished. Her room looked out at the ocean. She managed to explain that she relished the sunrise every day. Able to make sense of her gibberish, we had a good time, some laughs, had lunch in the dining room with others who lived there. Anna still remembers the old times and, so far, so do Andrea and I so there’s much between us. Before departing, we agreed to continue our periodic get-togethers on Staten Island. Anna indicated that she could no longer provide desert. We reminded her that now she was hosting, one or the other of us would take on her old job. Besides, Bruno’s no longer existed, had shut after 41 years, so what difference did it make. Anything sweet would do. 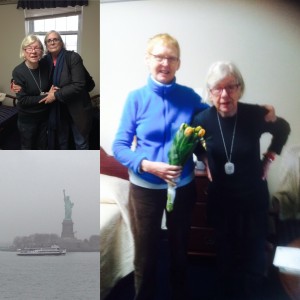 We left in time for Anna to play bingo with her new friend Sylvester. Outside, the sky had opened wide, pouring rain in buckets. The windows of the bus that took forever getting to St. George’s Harbor fogged up and the Verrazano-Narrows Bridge that had loomed so large on the way in had disappeared into the fog on the way out. When the gates opened to allow us onto the ferry, we sprawled on a bench on the Statue of Liberty side, hot coffee in hand. Andrea remarked that while clearing out Anna’s apartment, she’d discovered the pastries unfailing Anna had meant to bring with her on the evening of what would have been our final gathering. Unfortunately, as she wasn’t able to find her way uptown, she must have returned home and put the white cake box tied with string into her freezer. The cannoli’s were frozen solid when Andrea found them.

We began to speak of other things. The inevitable subject of movies came up. I suggested the film “Brooklyn” based on Colm Toibin’s novel, that I, a lover of everything Irish, had just seen and been melted by.

Ed and I saw it. I hated it, Andrea responded to my surprise.

Realizing that it was her story too, having emigrated to New York from Ireland as a young woman just as the girl in the movie had, I asked, How so?

It’s a fantasy. Unreal. No Irish girl comes to New York where a kindly Irish priest is waiting to set her up in a convivial boarding house with lovable folks and gets her a job at an upscale department store and finds a way for her to go to night school to study accounting…

I guess you had a different experience.

I ask her to tell me about it, realizing (shamefully), that I – usually so nosey – had never before snooped into her history.

When I finished school in Belfast, I was accepted as an exchange student by the Michigan Council of Churches in Bay City, Michigan. I was 18, fairly naive, had attended an all girls school. My family was Protestant but not religious. My father was dead and my mother wanted me to see afield before starting nursing school. Mother drove me to Cobh, Southern Ireland and I happily sailed in 1960 to Quebec, then took a train to Michigan. I was met by my ‘American’ parents who would be my family for a year. I was suddenly homesick, I couldn’t stop weeping. My ‘family’ got and stayed upset because I was so horribly homesick. The first Sunday they brought me to church, they were very Christian. I was marched up to the front of church and told to introduce myself. I was mortified, all I could do was stutter some words.

My American mother asked if my Irish mother drank. I said yes, she had a drink once in a while. I was told my Irish mother was a bad woman and wouldn’t go to heaven. I was also told that my clothes were all wrong. I was to share a room with the young daughter of the family, she was  upset that she had to share her room. She couldn’t stand me. The parents were abusive, the husband walked around naked except for skimpy underpants. They had had other exchange students who were Scandinavian and told me those girls were pretty, I wasn’t. Having an exchange student gave them status but unfortunately I was a big disappointment …

The only real thing that happened in the movie “Brooklyn”…that also happened to me…was that later, after I’d finished nursing school, and come back to America, to New York, where I was able to work in a good hospital, I, like Eilis in the film, had to go back to Ireland. Eilis was summoned when her sister dies, me when my mother got sick. Like her, once there, my mother’s women friends told me it was my duty to stay and care for my mother. Their view was that I should give up my New York life since I had no husband, no children. My mother and brothers never told me I should stay but the Greek chorus did. My mother had had both legs amputated because of bad circulation. I stayed and lived at the hospital with her. At night I’d lay my head at the end of her bed where, because she has no legs, there was a space for it. She finally died, setting me free. I closed her eyes. Before I left the hospital staff asked if I wanted her two amputated legs. I want to kill them. I said No. I emptied her small apartment, then my brother took over, and I returned to New York. Three months later a friend took me to Montauk for a weekend. While there I went into the sea alone. I thought I should keep walking away from the shore, I should drown. It was misty, seductive. I thought of my brother and came ashore. That’s a little less romantic than “Brooklyn” wouldn’t you say? 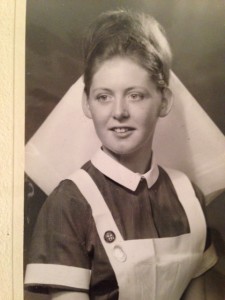 She shakes her head. So much for romance, goodheartedness, opportunity, good fortune, kindly men of God…

Our ferry was docking. We agreed to arrange our next journey to S.I. in the New Year.

I’ll bring the wine and drinks.

We quickly walked toward the #1 train, wanting to get home before the worst of the pre-Christmas Eve rush began. I felt a little naive, also foolish to have been so drawn into “Brooklyn” – both the book and the film. I remembered something Virginia Woolfe had said about fiction: “Fiction is like a spider’s web, attached ever so lightly perhaps but still attached to life at all four corners.” And what about fact? Apropos of Andrea’s youthful experience, fact seemed like an Asp nest, also attached to life at all four corners.