Jerusalem meets Not Not a Jew 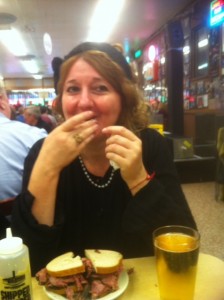 Met my visiting friend Sandra Zemor for lunch. Sandra’s an often-exhibited  Paris-based Israeli artist. It’s a drizzly day. I’m tired because I was up reading almost the whole night but hadn’t wanted to cancel. Thinking that perhaps Sandra would enjoy some New York-style deli food in a place where the ghosts of New York Jewish immigrants still wander and nosh, I text instructions on how to get to Katz’s Delicatessen from Alphabet City.

We find each other in the high cholesterol crowd of tourists and hungry locals. Sandra’s carrying a copy of her book of drawings Jerusalem and the Lost Princess; I’ve brought a copy of my newborn novella Not Not a Jew. We exchange our Jewish-themed gifts. How much we seem to have in common. 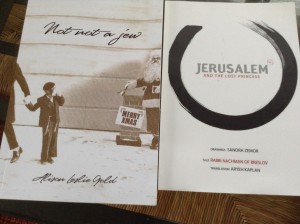 I ask how she’s weathered the 11/13 Paris attacks?

It’s awful for everyone, she  tells me, And being Jewish makes it worse.

Well, it’s complex. For Jews it’s not any longer whether or not to leave France … but when to leave. I keep a suitcase ready.

I am, she asserts, And most everyone else who is Jewish is too. Many have already gone.

I’m tongue-tied: (I think: about a Jewish couple I know who raised their children in Paris, lived there for twenty-five years and suddenly, a few years ago, moved to the States. Why? I’d asked at the time. To be closer to my husband’s old father, I was told. I’d believed and not believed, but it seemed too personal to pry further. I think: of my daughter-in-law’s family living in Brussels, the many tensions I’ve heard discussed about being Jewish in Belgium. I think: of the arguments I’ve had with my knee-jerk-lefty friends (some Jewish), over their blanket disdain (sometimes rage), against Israel (Israel as Goliath; Palestine as Little David). When I wonder, Aren’t both sides right and both sides wrong? no softening or nuancing is forthcoming. I think: of the cement and metal barricade around the Oslo synagogue with the round tower topped by a spire to which I was invited to give a talk a few years ago, of the bullet holes in the synagogue’s stuccoed facade from some kind of attack.)

While we lunch, Sandra laments daily life that’s heavy with so much fear and tension as an “out” Jew. It’s awful. I love Paris. she pines, I love my studio. My work has gone well in Paris. It’s 2015 but is like 1940 all over … and again its time to leave Europe …

As someone once saturated in 1940, 41, 42, 43, 44 and 45, my innards twist. I do not want to believe it’s come to this. Not that I’m blinkered as to increased anti-semitism around the world.  Roll anti-Semitism and anti-Israel and anti-Zionism into a ball and what do you get? A ball of hate? But leave France? Am I in denial? Am I blind? Am I not enough of a Jew to recoil? I’ve hardly felt menaced in Europe or North America at anytime during my travels but her words freeze into black ice under my wellbeing. Additionally, as I’m old and death or marginalization isn’t worrisome to me, it’s more than anything so so so sad. My novella, chewed over for eighteen years (Not Not a Jew) is about Jews as an endangered species. I think of our tribe at this point in time this way: Jewishness as a pimple on one’s nose, or a pebble in one’s shoe, but – so far, though something of an outsider all my life – I’ve not felt as if I need to keep a suitcase packed or begin looking for a present-day equivalent of Anne’s hiding place if such exists.

We finish eating and go out into the misty drizzle. Walking along Bleecker Street, I open and share my red striped umbrella. Very soon, though, we both admit we hate umbrellas and would rather be wet. Yes, we have much in common. We laugh. I close the umbrella. Indeed we do, but, not quite everything. I ask, Would you write a little about our conversation and send it to me? I’d like to understand your feelings as a Jew and child of a Holocaust survivor living in Europe seventy years after the Holocaust better.

Sandra says she will. Anointed by friendly rain, we go our separate ways. That night she writes the following:

It is fear
It is deep sadness

And again and again
we are the cause
the enemy
and the reason..
for the blood 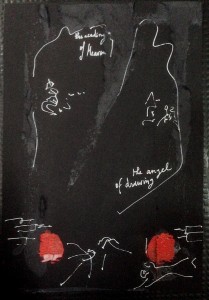 « “Three Cigarettes in the Ashtray” » It’s Chanukkah … lighten up