“One less bell to answer” 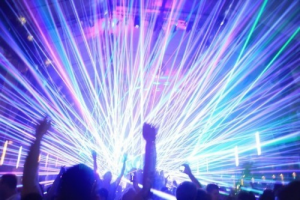 First met G. in 1971. I was at a dimly lit disco (Blow Up) down the street from the United Nations on Forty-ninth street at which an oval bar, also small tables, encircled a packed dance floor. At intervals lights flashed so rapidly that we dancers jerked backward, forward, appeared to stop moving entirely as flicking flashes of light splashed and whipped us. Our bodies writhed-snapped-twitched more slowly than time itself in a comedic dream illumined. Capped teeth glowed florescent blue in these strobes as did white shirts. A few roasted chestnuts (in lieu of dinner bought from a street vendor earlier), lay uneaten on the bar while I supped on icy vodka. G. (also at that bar though as yet unknown to me), had recently emigrated to New York from Dublin, Ireland, was sipping whiskey, had already downed a pint of courage-giving Jameson (I later learned), while sitting in a blue Toyota parked nearby.

Overheated and intoxicated, I’d ripped off my sweat-soaked blouse and brassiere, dropped them on my barstool, was left wearing a maroon-colored, cashmere vest. The time of year was early winter, like now. Just before my soon-to-be lifelong friend G., a few others, and I left for an after-hours place, I felt an embrace from behind and felt arms slipping into the armholes of my vest. One cool hand enveloped a sweaty breast, a second cupped the other. I didn’t turn to see who it was, one didn’t in 1971. I just took one of those brash hands and dragged the attached body (who turned out to be G.), with us when we left. Once outside, the sounds of the city were muted. An inch of fresh thick snow had fallen, coating everything including every care in the world. 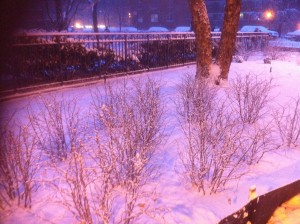 A few of the songs heard over and over and over that year: Take Me Home, Country Roads, My Sweet Lord, Never Can Say Goodbye, Me and Bobby McGree, If You Really Love Me, One Less Bell to Answer* whose words go in part …

…..A chair is still a chair
Even when there’s no one sitting there
Well, I’m not meant to live alone
Turn this house into a home

When I climb the stair and turn the key
Oh please, be there, Still in love with me