Nov 12, 2015 By Alison Leslie Gold in Memories of Anne Frank, Reflections of a Childhood Friend 2 Comments 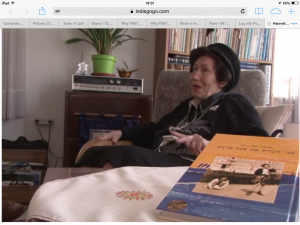 I met Hannah Elizabeth Pick-Goslar in Jerusalem in 1993. We spent many hours together while she told me everything she could remember about her childhood friendship with a girl she grew up with in Amsterdam named Anneliese Marie. Hannah and Anneliese lived next door to each other from age four to age thirteen until World War II came to Holland. One day with no warning Anneliese and her family abandoned everything they owned, asked their lodger to feed their cat, and disappeared. A little less than a year later, Hannah and her family were arrested and deported to the first in a series of brutal concentration camp from which only Hannah and her sister Gabi emerged more than two years later. Hannah gave me permission to write about her memories of her friendship with Anneliese and of her own struggle during the war. … It was long ago, so it was often very painful and difficult for Hannah to remember these times.

Here is what Hannah (nicknamed Hanneli) had to say about why she agreed to allow me to write a book about her life and her childhood friendship with Anneliese (nicknamed Anne, pronounced – Ann-ah):

“This story about my youthful friend Anne Frank and myself is an important story for children as well as for adults. But to go through this painful remembrance again and again, and tell about this awful time, even with the support of the writer Alison Leslie Gold, I had to have a reason.

“Anne wrote in her diary on November 27, 1943, about me. She asked why should I (Anne Frank) be chosen to live and she (Hannah Goslar) probably to die? Ironically the opposite came true. Now I am a happy grandmother and great grandmother in Israel, and it was Anne who died. Because of this irony I feel obliged to tell as much as I can about Anne Frank. Anne wanted to be famous and live on after her death. By telling what I remember, perhaps I can add a little to her fame, though Anne never would have dreamed how famous she is now….

“I once asked our late headmistress, Mrs. Kuperus, if she had seen something special in Anne. It was her opinion that a child who you close off from the whole world, from her friends, from nature, from flowers, from animals, from everything, who lives under such unreal circumstances with people older than herself like Anne did while in hiding, will develop much quicker than in regular circumstances. Perhaps she was right.

“Anne’s diary reveals the deepest part of my friend which because of her tragic death, no one would ever have known if the diary hadn’t miraculously been preserved. But Anne’s diary has no ending: it stops right in the middle one morning when Anne and the others in hiding were arrested by the Nazis. Perhaps a book will add to the knowledge of Anne Frank, will fill in what really happened — as horrible as it was — to my friend after the diary ends….” 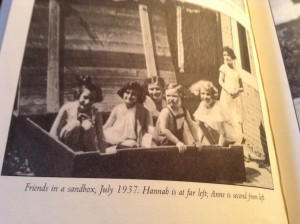 [Photos: (top)Hannah Goslar, who turns eighty-seven today, at home in Jerusalem, Israel. On the table is the Hebrews translation of my book about Hannah for young people ages 10-14, Memories of Anne Frank, Reflections of a Childhood Friend that has, so far, been translated into over twenty languages; (bottom)Hannah Goslar, age 8, far left, with Anne Frank, age 8, second from left, along with four friends playing together in a sandbox, in Amsterdam, Holland in summer of 1937.
« Marking dates » Encomium Andréa