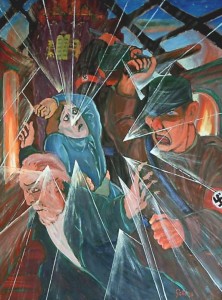 Today, November 9th, marks: the 77th anniversary of the German Reich’s 1938 destruction by fire, by havoc, by ravage, of 267 synagogues as well as 7,500 Jewish-owned shops including their wares, public humiliation, beatings and rapes of countless Jewish people, 91 Jews murdered, 30,000 Jewish men arrested and sent to Dachau, Buchenwald, Sachsenhausen and elsewhere. That year, November 9th fell on a tuesday. The horror continued on through the night into and through November 10th, a wednesday.

Various memorial commemorations have been scheduled around the world including one in Umeå, Sweden to which no one in the Jewish community has been invited though pro-Palestinian and anti-Israeli factions will probably protest outside. I wonder what the Swedes would think if they were excluded from joining in on the singing around bonfires on Walpurgis Night, or, from riding their bikes around Sweden’s Lake Vättern on Vätterrund Race day in June along with the non-Swedish bicyclists?