Nov 8, 2015 By Alison Leslie Gold in Love in the Second Act 4 Comments 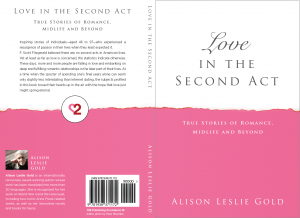 With my little jewel Not Not a Jew recently launched by TMI Press, only one reissue (of five previously published works) remains. Soon it too will be released with a new Author’s Note to blow freely in the wind. The following piece on Georgia O’Keeffe’s last love, written during a snowy winter, is from this nonfiction work – Love in the Second Act, Act Two, Scene Nine, “Time is on your side“-

The wind is howling and raging outside, snow blows willy-nilly, spinning and whirling. I can see nothing from my window, it’s a kind of whiteout. Several fire trucks race down the avenue, their gross sirens always unsettling. These heart-stopping dissonances that augur danger and emergency are the downside of being back in New York. Of being anywhere at all. The upside has been the long, bracing winter, the elation I feel every morning when I go downstairs and buy a container of coffee (“Light, no sugar!”) from the vendor at my corner, Mohammed, who was born in Alexandria, Egypt. What seemed like a still-standing, cold heart early on in my return to New York, no longer does. Something inescapable, uneffaceable, has been weathered.

Between dozing and eating chocolates, I read a biography of Georgia O’Keeffe. It couldn’t be cozier. At times like this, storms and all, I feel as if I’ve got the best life in the world. As I read, I’m struck by how O’Keeffe was a woman for whom age did not dictate her actions, who seemed to fall in love as deeply at ninety as she did at thirty. Alongside the reputation for overt sexuality in her work (her large-scale flower paintings evoke genitals of both sexes), she’s known for an austere (some might say “severe”) lifestyle: The tight knot at the nape of her neck remained unchanged through out her life; she slept in a single, rather narrow, bed; ate her spare dinner at five-thirty in the afternoon and woke in time to see the dawn. (“You mustn’t miss the dawn, it will never be just like this again,” she said often.)

Her relationship with the young man Juan Hamilton suggests that even at the approach of senectitude, the pleasures that she experienced remained keen. O’Keeffe’s husband, Alfred Stieglitz, was born in 1864. Juan Hamilton was born in 1946, the year Stieglitz died. Both Stieglitz and Hamilton were dark, sensual men of talent with full mustaches. She was twenty-seven years younger than Stieglitz and fifty-nine years older than Hamilton. When she met Hamilton at the age of eighty-six and they began to live together, Stieglitz had been dead for twenty-seven years. Quickly her liaison with Juan became a source of concern to her heirs; he was accused of being a gigolo, an opportunist who was coercing an old woman for his selfish gain.

O’Keeffe’s plan to live to be one hundred years old fell short by two years. Until she died in 1986, in her ninety-eighth year, the bond between O’Keeffe and Hamilton held. Her capacity to sustain and maintain a deep attachment with another seems to have lasted to the end of her life. Near the end, when she recognized almost no one, she still knew Juan and, according to witnesses, thought every man was Juan. When she called out, it was Juan whose name was uttered. Though only Juan and Georgia knew the truth of their liaison, Juan gave Georgia the best years of his youth, and Georgia gave Juan … well … everything. As per her wish, her cremated remains were scattered by Juan’s hand onto the dry desert where, as Georgia had often said, “the sun burns through your bones.” Her ashes joined with the desert sands to be blown by winds into drifts of mauve, blood-red, lemon-yellow layers that resembled the shapes in Juan’s sculpture and the lines and colors in her painting. She’d had enough time for it all and more. 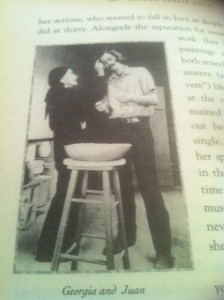 It’s gotten dark. The storm’s petered out. The new sliver of moon hangs alongside the golden crown at the top of the fifty-story Metropolitan Life building, about a mile distant from my window. The crown looks like a jewel floating in the sky. Below it, the clock’s face is lit up in ivory splendor, projecting a translucent, floating sphere that renders the hands of the clock invisible from where I stand.