I occasionally order a cream pie from a tiny kiosk at the port beside what once was the old old bakery run by brothers. After heating the opulent pastry, the pleasant owner shakes a powdering of confectioners sugar across its crusty surface, smiles and asks, Cinema? I nod. She shakes on a small cloud of cinnamon.

The last time I saw my great friend Lily (hours before she died, not that we knew it then), I’d just arrived in Greece, was elated/depleted at once. Lily prepared sweet milky tea along with a small mountain of buttered bread topped with yellow cheese. At one point she peeled an ivory-white clove of garlic and folded it into a fat slice of soft, fresh bread. While she ate, her green marbled eyes burnt with delight. Until sunset, we drank tea, ate bread and cheese and then I switched to coffee and she to whiskey. 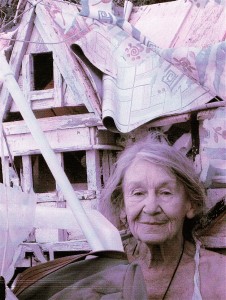 I’d first arrived in Greece on 21 June, 1970 under a full moon, age twenty-four, had sailed  from New York with my four year old son on the Greek liner ss Queen Anna Maria, Cabin Class. We’d been ten days at sea. Two drinking friends had driven from Mojaca, Spain (an American, long dead, a German, alive and well and living in Marrakech), met us; also a young half Norwegian/half English male au pair. We raced to see the Acropolis, taking a lick of LSD on the way up, and I filled my pockets with still-warm, ancient marble bits on the silky way down. 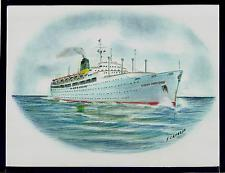 After a few hours sleep at the Grand Bretagne, we piled our hung-over selves along with baggage and one Norwich Terrier named Oinki into taxi/s that took us to the Port of Piraeus that resembled a set from the film “Never on Sunday” which, now that I think of it, it had been. We got the 8:15 a.m. ship, took First Class tickets for about $2 each. We stopped at Aegina, Methina, Poros along the way, reached the Isle of Hydra around noon where we (kits, cats, sacks and wives) disembarked.

My German friend had rented a hilltop house for us through a Russian woman whom she’d discovered by chance on a quick visit a few days before. This woman lived with her two children, a husband who was often away working along with a borzoi named Julik, a mutt named Metropolitan, in a lopsided,  whitewashed house just below ours. After we’d dragged ourselves and our things up about a million steps to our rental, I encountered the Russian, Lily, for the first time noticing unusual green eyes. Her hair was wrapped in a scarf as she and her children were whitewashing. One of us remarked, Ah. Summer Solstice, the longest day, the long summer stretches before us. In a thick middle European accent, Lily corrected, No! The long days are finished. The days are getting shorter now. Summer is really over.

Why are tomatoes so luscious here? They never taste this way anywhere else. I never eat them anywhere else. Ditto grilled calamari, horta, raw onion, tzatziki, feta, cream pastry with cinema …

One time I glanced over at Taso’s Café Neon from the Roloi Café and saw Taso’s crusty old father sitting in his usual chair at a side table sipping something and mused, Amazing that Taso’s father is still alive, to be told, Taso’s father died twenty years ago. That’s Taso you’re looking at.

Begrudging: After shaking her head – Tipota! – [nothing] – a fatuous smile at the corner of her mouth on each of several visits, the worker at the post office will eventually shrug, reluctantly turn and thumb through Poste Restante mail boxes, usually finding mail addressed to me from someone who has been dead for at least three years.

Uninvited: the volume of normal meowing increases to a howl, piercing, screeching, bawling, doleful, whining caterwaul. Which cat is this? I peer into the black velvet night, shine my torch, glimpse only a cat’s raised rear end, tail curled, the cat unidentifiable, the grating yowl, frequent, urgent, persistent on and off through half the night. Why not! Cats can always sleep all the next day. 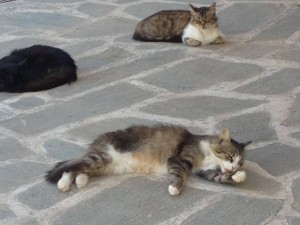 Unfailing: the scent of jasmine, second cousin to the the olive, silent, unassuming, climbs (floats) through my open window whether invited or not.