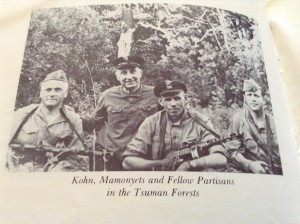 Speaking of bad good luck, here’s an excerpt from my book Fiet’s Vase and Other Stories of Survival, Europe 1939-1945 recently reissued with new material by TMI Press from Part I, Chapter: “Uncanny Luck” [Kohn is on the far left in the photo]

From the table of joy

Sometimes a bone is flung

After repeated efforts beginning in 1948, Nahum Kohn was finally allowed to immigrate to Canada in 1972. He’d been honored and decorated for his heroism by the Soviets for the five brutal years he spent, first as a Jewish partisan fighting with other Jews and then with Russian partisans in the Ukrainian forests of Volhynia and in and around the forests near the city of Rovno during World War II. I’d discovered his memoir A Voice from the Forest in the early 1980s, and it had left an indelible impression on me over the years. When I tried to find out more about Kohn, whether or not he was alive, I hit blank walls. By a fluke I located his coauthor and learned that Kohn was indeed alive, in his middle eighties, living in Montreal. I wrote to him immediately. One morning I found his reply in my mailbox: This was one of those magic moments of connection. His letter offered his cooperation which he generously gave during several interviews.

Kohn’s wife is also Jewish. He has two daughters, Olga and Helena. Both daughters have studied music in Canada. He began writing his somber history with these words: “I will tell you about a world that went crazy, a world where humans became beasts, life turned worthless, and the forest became home. And I also will tell you about people who refused to surrender to bestiality, people who resisted the descent into darkness. Most of them are gone, but I see them still, in their tattered rags, city boys darting from tree to tree in the forest, repaying death with death. I, too, was a city boy, and although I survived, I have never really left those forests. They will be with me till my last breath.”

Nahum – a muscular young watchmaker in his youth, from a large religious Jewish family – was living in Warsaw on the day the Germans attacked Poland in 1939. He was twenty years old. His courage had never been tested and he didn’t know whether he had much or even any courage at all. … Kohn’s specialty became military intelligence. Because he had avoided death so many times, his nickname became “Vezuchiy“- the lucky one. Once, after completing an exhausting and lengthy assignment near the village of Derazhno on horseback, one of his fatigued fellow partisans on foot begged to trade places with him temporarily. Kohn agreed, dismounted and walked on as the fellow galloped off on his horse. Soon he heard an explosion up ahead. His horse had stepped on a buried mine, was blown to bits. Although the rider briefly lived, his wounds were mortal and he too died.

At another time, after a small group of partisans, Nahum at the head, had blown up a train, they were attacked by Germans and police, and many of his group were killed or wounded. The survivors traveled through the forest in the night and only stopped for a rest at dawn. His comrades gathered around him and began to laugh. One said, “You’re a vesuchiy. I heard about your past adventures. No bullet can down you!” Another added, “You certainly deserve that name!” Then Nahum noticed that the bulky jacket he’d been wearing unbuttoned had been pierced by bullet holes in several places. He took off the jacket, held it up and realized that he could see through the holes though not one bullet had even grazed his flesh… 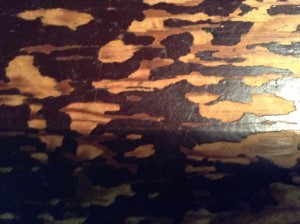 « This place, three » from Not Not a Jew, tiny schmears on tiny matzohs