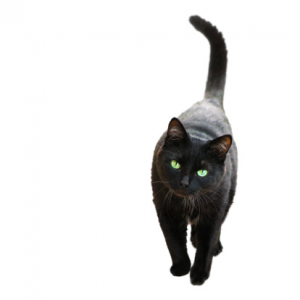 In summer one of my guests (a friend who I’ve known since she was four years old) told me that some beads she was wearing while washing her hands at the bathroom sink while staying at my Greek house had broken, scattered, many disappearing down the sinkhole. Since the necklace was the last gift given by her mother (a close friend as well) who suddenly, shockingly died soon afterwards, she asked if there was any possibility of removing the sink-trap on the chance that some of the beads had gotten trapped there … unlikely as that might be. As it was middle June, and I was far away, I put out a few feelers but quickly realized it would be better to wait until I was actually able to oversee the operation personally. (Try explaining ‘sink-trap’ to a non-English-speaking Greek or Bulgarian.)

I arrived in September with many little (and not so little) tasks on my to-do list. One beautiful day melted into the next. Some things got done, other’s didn’t, some half done or almost begun. On 2 October, my friend and I marked the third anniversary of her mother’s death. On 9 October I marked the anniversary of my own father’s death. As my time here had begun to run out, I realized much on my to-do list would most likely remain undone. On 9 October, as it happened, a local friend stopped by. Being a seasoned homeowner, I asked her advise about sink-traps and was given a short lecture that included the following information: “Usually, if you can actually get a sink-trap off these old pipes, you won’t be able to get it back on.” We wandered into the w.c. and bent to study the s-shaped pipes with bulging trap. She gave it a little test tug to demonstrate the procedure necessary for removal (albeit dicey) and lightly twisted. No sooner had she touched the trap, when we heard the sound of crumbling. When I turned the faucet on, water leaked onto the bathroom floor; a crack in the pipe had opened  above the trap. Needless to say, my friend was embarrassed. I told her not to worry, obviously the 40-plus year-old pipe had seen better days

Later, a worker came by to have a look. It was nearing sunset. No sooner had he bent to examine the pipe when an entire section (including the trap) came off in his hand. We took the rusty rotted part outside to examine. As the trap was staring us both in the face, I asked if he could possibly remove it and tried to explain about the beads. Though quite strong, he tried, but the corrosion was so bad it wouldn’t budge. He tried and strained while I braced myself to possibly behold contents that would likely be beyond disgusting, thirty-five years of god knows what. Not one to be easily discouraged he strained again and again until the screws began to turn. 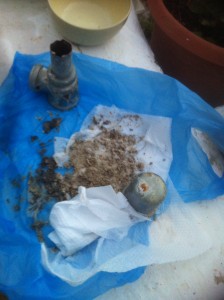 Spreading a blue plastic bag across the wall, I snatched the trap from him and spilled out what looked like volcanic ash. (see photo above) Using my index finger, I spread the contents but neither felt nor saw any beads. I further examined the calcified muck. Nothing. My heart sank. I was about to throw the lot away (thus erasing for eternity the slim hope-against-hope of resurrecting a precious gift ) but decided to push my finger through again, more slowly. In doing so, I separated out a few minute (the size of the head of a pin) bits that felt like calk but actually could have been beads, copper colored, one blue…. Could these be them? I couldn’t imagine they were. I sifted through, removed as many of these bits as I could find, and put them into a small bowl with water so I could take a photo (see photo below) that I immediately emailed to my friend who lives above the Arctic Circle. I wrote: Could these tiny beads be yours? 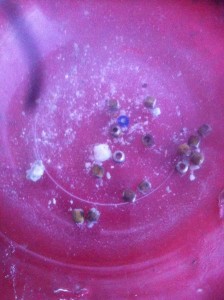 Not twenty minutes later I received the following reply:

I could hardly believe it.

I wrote back explaining the strange coincidences that had configured to make the discovery possible. I told her I too was amazed. And I was. Am. Always will be. I told her I’d no idea they were so tiny, had come very close to throwing the entire mess away. After draining and drying the beads, I enclosed them in cling wrap, also a small plastic bag, then wrapped the slim package with tissue paper. All went into an envelope and was marched right to the post office at the port and mailed. When I returned home the following email was waiting:

When Z. [her daughter] lost her first tooth, we were visiting my mother. Z. had been excited that her first tooth was loose. Suddenly, while we were eating dinner and Z. was finishing off a piece of garlic bread, I noticed a gap in her tooth row: the tooth was gone. She’d swallowed it. She was crushed and wailed for ages.

So I went through her poop all the next day. To make the hunt more challenging, we’d been eating a ton of fresh sweet corn. Much of this passes through the system undigested. I kept thinking, “AHA, I’ve  found the tooth!”, only to realize with disappointment that it was yet another kernel of corn.

The tooth did turn up eventually and Z. was thrilled. I earned big points with both her and my mother that day! Z. still has that first tooth, along with all the others she’s lost, in a little ceramic box that my mother found for her. 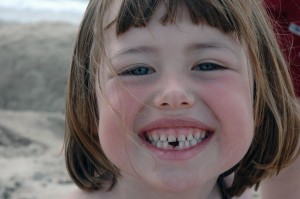