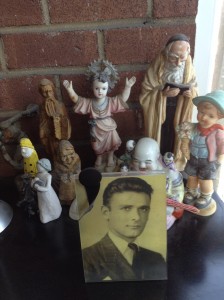 Various statuettes loiter in a corner of my enclosed terrace. Joining them, my father as a young college graduate about to take on the world. And my mother too. Little could he imagine the bumps and tripwires he would encounter concluding with his death in New York overlooking the East River on October 9th a few years ago. Following, an excerpt from a work-in-progress titled Tomorrow Is Forever, a full length fiction/non-fiction using an epistolary format (a continuation of “Lost and Found” http://www.amazon.com/s/ref=nb_sb_noss?url=search-alias%3Dstripbooks&field-keywords=lost+and+found+Alison+Leslie+Gold&rh=n%3A283155%2Ck%3Alost+and+found+Alison+Leslie+Gold published by the Am. Univ. of Paris/Sylph Editions). Some of those to whom I write in this book are already dead, like Lily, my Russian friend. If I can ever get my desk cleared a bit, this is the next work on which I’ll be focusing entirely.

My father’s funeral at Reddins on 14th Street, the same place that handled Dorothy’s. We had his college photo blown up, 3 feet by 2 feet, and in it he looks like a movie star. It was hung above his pine coffin chosen by my mother. The coffin was open at first for those who wanted to see him ‘in repose’  which I did and did and did, as did a few others, but not all. The people at Reddins had not done a very good job of covering his battered face and neck; the way they combed his hair would have made him laugh. But, they did shave him which mattered to him greatly as he hated being unshaven.

The coffin was covered with it’s lid for all eternity and a short service began. We’d hunted down the rabbi who had spoken at Dorothy’s graveside the year before. He said Kadish, some prayers, and several family members also spoke. I read from my book – Love in the Second Act – a chunk of an interview conducted with my father and mother three years earlier about their visit to the Blue Grotto on Capri. My son spoke, as did my two sisters, and others.

We ended with Richard Harris singing music from Camelot, which was the last musical DVD I’d brought to my father and mother shortly before he went into hospital. My father sang along, his tenor voice still beautiful despite dementia, still knowing every word:

. . . By order, summer lingers through September.

But in Camelot. Camelot. That’s how conditions are.

The rain my never fall till after sundown.

By eight, the morning fog must disappear.

In short, there’s simply not.

than here in Camelot.

Then his coffin was lifted up and carried out to the hearse waiting on 14th Street, and we all trailed behind.

The cortege of three limos and a few private cars followed the hearse to the cemetery somewhere in Queens, near Flushing. The cemetery was chosen by my mother years before, and, of course, agreed to – as he agreed to everything decided by my mother for sixty-eight years – by him. This is where my mother’s Russian mother, her Russian father, grandparents, aunts, uncles, step-mother, et al are all buried. Thus, my father of working-class origins, shall rest with mother’s bourgeois family, not his own who are buried together in another cemetery a few miles away, for all time. Of course there is a parallel space beside his for our mother.

A few who had not spoken before, spoke at the open grave, among them my brother, my niece Abigail, who began her talk by saying:”Grandpa Bill, where are you now? Beautiful old man. I think of your kind face as I enter apartment 16B. And there you are, watching PBS at a deafening volume in your underpants. Your greeting, followed by the slow and dignified walk into the other room, to put your trousers back on…”

Finally, the unadorned coffin of Professor William Greenwald, who taught Economics at City College in Harlem for 63 consecutive years without missing a day, who, when I would publish a book, would sit up all night reading it in one go, was lowered into the grave he and his wife had purchased during a drive thirty years before.

There were flowers distributed that my sister Nancy had grown. These were dropped one by one onto the coffin by each of us, along with a shovelful of dirt. Flowers and dirt mixed on top of the coffin.

Reluctantly leaving my father alone there, we were driven in the hired town cars back to  Greenwich Village to eat bagels and lox, whitefish, sable and more from Russ and Daughters without our father sitting regally at the west end of the long table for the very first time in our lives.

with my father’s hazel-marbled eyes

have infested the trees

in the garden below