More on Sugihara from USA Today

Oct 8, 2015 By Alison Leslie Gold in A Special Fate, Chiune Sugihara No Comments 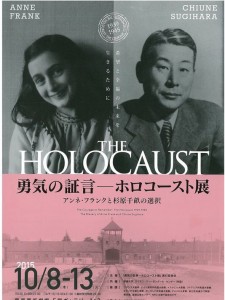 Two articles written by the journalist Kirk Spitzer have appeared in USA Today. Here’s a short excerpt from the first and the complete article relating to Chiune Sugihara, the subject of my interview with Mr. Spitzer and my book A Special Fate, Chiune Sigihara, Hero of the Holocaust, recently reissued by TMI Press.

TOKYO — It should have been no surprise when Japanese Prime Minister Shinzo Abe announced a major increase in financial support last week for migrants flooding into Western Europe — but no change in his country’s restrictive policy toward those seeking refuge in Japan. For decades, Japan has been one of the world’s biggest contributors to international relief organizations, spending billions of dollars to help people fleeing wars, poverty and natural disasters worldwide. Yet Japan also has been one of the least welcoming nations to refugees. Of 5,000 foreigners who requested political asylum in Japan last year, only 11 were granted safe haven, an acceptance rate that is 1/100th of the world average…

TOKYO — As world attention is focused on the plight of migrants fleeing conflicts in Syria and Iraq, a Japanese diplomat who risked everything to save thousands of Jewish refugees during World War II is finally getting his due.

Chiune Sugihara was Japan’s vice consul in Kaunas, Lithuania, when he defied government orders and issued travel visas allowing thousands of Jewish refugees to escape Nazi persecution in 1940. He later resigned under pressure from the Foreign Ministry and spent years in self-imposed exile.

Sugihara issued more than 2,000 visas and saved more than 6,000 lives. He wrote many of the documents by hand during a feverish five-week period, passing the last out of the window of his train after his consulate was closed and he was ordered to leave the country.

“Sugihara is proof that one person’s choice to take action in the face of evil — whatever the consequences — can make a difference,” said Rabbi Abraham Cooper, associate dean of the Simon Wiesenthal Center in Los Angeles.

Though considered a heroic figure in Israel and elsewhere overseas, Sugihara is not widely known in Japan. That seems likely to change.

A government advisory panel recommended last month that documents relating to Sugihara — known as “Japan’s Schindler” — be submitted to the UNESCO Memory of the World Register, a compendium of key historical documents.

An exhibition devoted to Sugihara and Holocaust victim Anne Frank will open in Tokyo this week. A movie based on Sugihara’s life is scheduled to open this year.

Many of the refugees aided by Sugihara were on the run from Nazi persecution in Germany and Poland. They were able to travel on the visas he issued to Japan, then onward to safe havens in China, the USA and elsewhere.

Sugihara, who was forced out of Japan’s foreign service after the war ended, spent many years working and teaching overseas. A small museum is dedicated to his memory in his hometown in central Japan. The Ministry of Foreign Affairs issued an apology to his widow and family in 1991 and later dedicated a plaque in his honor at the ministry headquarters in Tokyo.

Historian Alison Leslie Gold, author of A Special Fate: Chiune Sugihara: Hero of the Holocaust, said it is time that a wider audience learns of Sugihara’s courage and self-sacrifice.

“There are a few folks in history, like Chiune Sugihara … whose human values trump practicality or their own safety,” she said. “Because of them, people like us can see it’s possible to swim against the stream, throw caution to the wind, at times of moral crisis.”