When I sit down to relate the story of my soldier it feels as if I am relating a Bubba-miser, a fairytale, as if the snow that fell was really goose feathers, the moon in the sky a matzo ball.

The Norwegian boy’s dismissal of me stung and chilled my heart. We’d planned to meet at the theatre called East of Paradise. I bought my ticket and waited for my mercurial, oft distant Norwegian. I sat alone in the lobby until the doors to the theatre closed, sat through the movie, still waiting and wondering. I walked home through the slippery February Arhus streets pondering my next move. The next afternoon I walked in the Queen’s forest beneath the black Beech branches, along the strand, boots pushing aside the snow like an ocean liner parting waves. I craved the sun. Not this watery winter light but a fierce buzzing heat that would bleach my bones.

Israel and Spain were my top choices, in my mind they were both lands of golden oranges, twisted olive trees and sloe eyed boys. Israel won because I knew that my Jewish grandmother would spit in the bucket if Israel was the destination. She did, a meagre spit, but every bit helps when you are a budget traveler. My travel agent had a connection on Kibbutz Nachshon and he arranged for me to volunteer there.

I arrived in the night and woke in early morning in the little shed I was to share with a German girl, Suzanne. She left for work before dawn and I laid there in that tin can of a room, filled with regret. What had I done fleeing from heart ache to this strange land? Three poppies waved outside my door, like old friends from Hydra, my childhood island. Just the sight of them steadied me. I wended my way to the communal dining room, stopping to ask directions from a tall dark man with a gold earring that glinted pirate-like in the dawn. 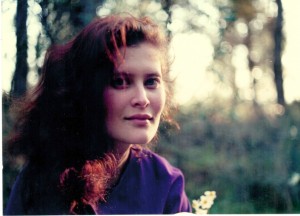 So I began my time on kibbutz working in the pink flowered almond orchards, scything the weeds, filling my canvass sack with coral persimmons, weeding the cotton fields gazing at the soft hills of Jordan. Together with the other volunteers, we sang Swing Low Sweet Chariot “Looked over Jordan and what did I see?”. The months passed and my heart swelled in this strange land, I wandered the prayer clogged streets of Jerusalem, splashed in the fern guarded pools of Ein Gedi, danced the night away on thick wooden tables in the pulsing nights of Tel Aviv and fell asleep to lamenting songs of jackals. There were sloe eyed boys and fields of sunflowers that threw challenges to the sun.

My wandering feet drew me on to Egypt, and then to Turkey, Greece and round about to Denmark (where that Norwegian boy came to me, kneeling, to confess his regret and continued longing, like a perfectly wrapped present) and home to America.

Home. I was home and tried to settle in and be normal. I worked and saved, living with my mother. There was one problem. I would wake many nights from dreams of wandering, lost. Staggering to my mother’s room I would sob and tell her I had forgotten something, left something in Israel. I had to go back. She would sooth me and stroke my hair with her long dry fingers, telling me that I would go back. I did. Six months after I had come home I landed in Ben Gurion, stepped off the airplane to warm evening wind enveloping me in the scent of orange blossoms, lifting my hair high. Maybe that is what I love most about Israel it smells like turkish delight: confectioner’s sugar, pistachios and orange blossom

A friend picked me up at the airport and we arrived just in time for me to throw my back pack on my bed and head for dinner. Arriving at the base of the stairs leading to the dining room, I heard a man’s voice in the dark saying, ”You’ve been here before” as he clumsily rested his arm on my shoulder, his wide farmer’s hand slipping through my huge golden hoop earring. Trapped he tried to extricate himself from my wild hair and oversized earring with out further damage to ear or ego.

Sitting with his friends at a far away table he gestured to me telling them that he was going to marry me. They smirked.

After the meal I got up to make myself a cup of Nescafe and he came to our table and descended on my friends. Tell me something about her he begged anything before she comes back. Well Daniella said, she loves Joni Mitchell.
Just that day his Father had given him Joni Mitchell’s Blue album. He went home and played it. Loudly.
After dinner I was wandering the dark paths looking for my friend’s newly assigned soldier-room. Hopelessly lost I heard Joni Mitchell singing in the dark. Oh, I thought who ever is playing Joni must be nice and so I knocked on the door to ask directions. 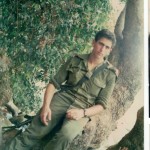 He was a soldier/kibbutznik with over two years left of service. He fell hard. It took me a few weeks but I too fell hard. Each month we’d cross off another square on the back of his belt, the thistles turned from green to gold. The first quenching rains of winter (yoresh) and last rains of spring (malkosh) before earth crackling summer. The waxy pomegranates bloomed, swelled and burst with seeds. I worked in the children’s house. He was a soldier.

It is a classic Kibbutz tale. The tale ends when the volunteer leaves the soldier and returns home with a broken heart and a good story. The soldier takes her to the airport, sheds a few tears and then marries the right girl.

But I clung to him like the seeds in a sunflower. Around the seasons we went. We wanted time together. Time without the army pressing on us. Time without me needing to leave the country every six months to renew my visa. We were tired of saying goodbye.

Hanaan came home every other week-end. He would arrive on Friday afternoon late. Bone-tired, sore, worn, he would find me where ever I was working and give me a huge hug and kiss. He smelled of freshly laundered uniforms and leather and the metallic, oily scent of guns. He smelled wonderful, sharp, safe, like the first snow of winter is about to fall. Magic and anticipation and relief. My soldier stumbled to our tiny nest of a room, lay his Galil in the corner and slept. When work ended for me I would rush home. Often special allowance was made for me because my soldier was waiting and I was sent home 15 or 20 minutes early.

On good days I would let him sleep till 6:30 and then wake him. We’d dress for Shabbat dinner, he always in a white cotton button down as is the custom for men and women on special occasions on Kibbutz. I would choose something simple and pretty from my meagre wardrobe. (My mother sent me care packages with shampoo and creams from home because I didn’t want to smell like all the other girls. Those kibbutz hotties who all used the same creams that they handed out for free each month along with tampons, aerograms and sensible items. I wanted to smell exotic like a capitalist girl) On the way to dinner he would pick a hibiscus (gold, red, pink) from a passing bush or a sprig of jasmine and tuck it behind my ear. We’d all converge on the dining room at 7. The air was gay and I can’t imagine that Paris in the Belle Époque held more glamour than those Friday evenings. 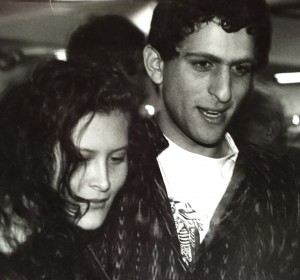 days Hanaan was un-wakeable. I would shake him and beg him to wake in time for dinner but he was too deeply asleep to respond. Our time was short. I would sit and cry into the night. Those ten days had worn him down. On Saturday he would wake after lunch and we’d walk in the Carob orchards and visit his family for cakes and coffee.

Sunday morning arrived. We’d wake before dawn. He’d dress in his freshly laundered uniform, polish his black boots and sling his gun over his shoulder. I’d fold his sleeves up sharply and turn down his collar. We’d walk together feet dragging with sadness until we reached the gate of the kibbutz. He set off towards the highway by the carob orchards just lit by the rising sun. I’d set off to work.

The tenth month of the second year was gridded his belt in weeks, the eleventh in days. On that day in May when we crossed off the last day our bags stood waiting in the corner. The next morning we flew to America.

[*****I’m pleased to post this tale written by invited guest, Johanne Rosenthal. Because I love her writing so much, I’ve been after her for a long time to send me something I could share. Finally, “Capitalist Girl” arrived. Bravo!!! I’ve known Johanne since she was three years old and sat on my lap laughing very hard, her feathery honey-colored hair tickling my nose. I’ve known Hanaan, her husband, only as a stalwart adult. This posting is to celebrate their twenty-fifth (25th) wedding anniversary. Below, a photo of my arrival on Hydra in 2013 taken by Hanaan with Johanne – in Black hat – and her scrumptious family enfolding, energizing me, after a long, tiring journey. Happy Anniversary Johanne and Hanaan !!!] 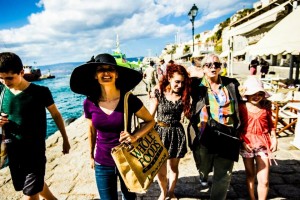