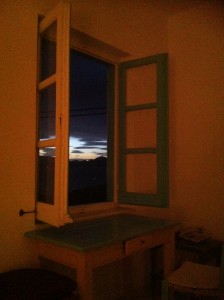 Finally the days of rain end; a rim of sunset can be seen.

Doors have swollen from the rain.The door to the old house won’t open; the door to the front gate won’t close. During the downpour, the leak under the metal spiral stairway stopped but water from the kitchen ceiling dripped onto the table where my papers and fresh bread are.

When the sun has dried everything, I fill in a crack in the terrace above the kitchen with acrylic sealant shot through a tube with a kind of cocked gun.

After scrubbing my dirty laundry in the red plastic bucket with soft cistern water, I begin to hang it on the line that’s strung across the terrace. A couple of pastel-colored plastic clothespins crumble when I pinch them, exhausted after doing their work through a long, baking hot summer. The sun is still strong, though it is now October. Almost before I finish hanging the last bits, the first have already dried.

Olympia, the hobbling tiger cat, hasn’t visited once. I’ve seen her at two different taverna’s, fat and swaggering, oblivious to my lack of affection at last. Perhaps it is because I still pine for Vigilante (see photo), also a tiger cat, that I can’t warm to Olympia, who is probably Vigilante’s second, third, or fourth cousin. 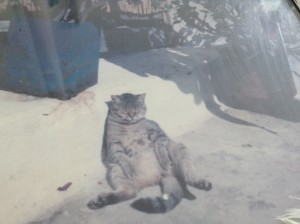 I’d sworn that I would never adopt a cat. Once, a renter had adopted nine cats and when I got to the island I found nine little faces meowing plaintively every time I opened my door. I then made it a rule that anyone staying in my house would be immediately evicted if they adopted a cat. If one had to feed cat/s, they must do so outside the gates of the house. However: One winter night the wind howled, the rain fell in buckets, and I heard a thumping on my kitchen door. I opened it to find a drenched cat so desperate to get out of the rain she had been throwing herself against my door. I let her in, told her, Just for tonight. She stayed six years. From that night on, whenever I would return to the island, day or night, rain or shine, winter or summer, I would drag myself up the last forty steps, put my key into the lock of my front gate, swing open the door. I’d then hear a light thump on the terrace in front of me. From out of the apricot tree (given by Lily) would leap Vigilante, onto that terrace. She would stand looking at me. (If cats could cross their arms to indicate impatience or ‘it’s about time’ she would have.)

The worker was due on Sunday. He turns up on tuesday but has not brought the right tools. He reschedules for friday.

A black cat crosses my path on the way to the post office. Another cuts in front of me on the sea road. Still another follows when I walk past the usual chickens and donkey and women gossiping down and around to dinner. At the taverna, this cat rejoins her litter of noisy kittens, one of whom climbs into my open backpack bringing more doses of bad luck except in Japan or UK, where black cats are said to bring good luck. The sleek green-eyed mother cat follows me home, darting under my feet, almost causing me to stumble. And, yes, got fed. (“He watched the dark eye slits narrowing with greed till her eyes were green stones. …then he poured warm bubbled milk on a saucer and set it slowly on the floor. –Gurrhr! she cried, running to lap. …He listened to her licking lap.” from Episode 4, Calypso, James Joyce, Ulysses) I’m wary of the promised good/bad luck and await the coming bad/good luck.

« Honored in Japan » More on Sugihara from USA Today